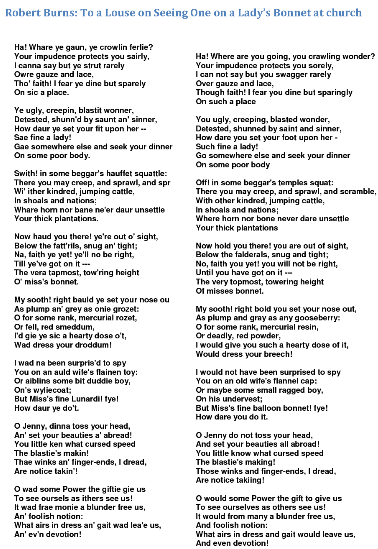 Ye ugly, creepin, blastit wonner,
Detested, shunn’d by saunt an’ sinner,
How daur ye set your fit upon her-
Sae fine a lady?
Gae somewhere else and seek your dinner
On some poor body.

Swith! in some beggar’s haffet squattle;
There ye may creep, and sprawl, and sprattle,
Wi’ ither kindred, jumping cattle,
In shoals and nations;
Whaur horn nor bane ne’er daur unsettle
Your thick plantations.

Now haud you there, ye’re out o’ sight,
Below the fatt’rels, snug and tight;
Na, faith ye yet! ye’ll no be right,
Till ye’ve got on it-
The verra tapmost, tow’rin height
O’ Miss’ bonnet.

My sooth! right bauld ye set your nose out,
As plump an’ grey as ony groset:
O for some rank, mercurial rozet,
Or fell, red smeddum,
I’d gie you sic a hearty dose o’t,
Wad dress your droddum.

I wad na been surpris’d to spy
You on an auld wife’s flainen toy;
Or aiblins some bit dubbie boy,
On’s wyliecoat;
But Miss’ fine Lunardi! fye!
How daur ye do’t?

O Jeany, dinna toss your head,
An’ set your beauties a’ abread!
Ye little ken what cursed speed
The blastie’s makin:
Thae winks an’ finger-ends, I dread,
Are notice takin.

O wad some Power the giftie gie us
To see oursels as ithers see us!
It wad frae mony a blunder free us,
An’ foolish notion:
What airs in dress an’ gait wad lea’e us,
An’ ev’n devotion!

Moslem Brotherhood, Sweden, Olaf Palme and the sins of the Father.

Just now · Daily Mail Online ·
This is an interesting Article. I have encountered other reports from both the United States and the United Kingdom which discuss the Moslem Brotherhood.
One way of looking at the Moslem Brotherhood is as a Political Think Tank not dissimilar to other Globalist Think Tanks whose aims are to promote Globalism and neo-liberal economic goals.
Although called the Moslem Brotherhood and broadly positioned as Islamic it is more precisely Islamist in a political sense and not a religious sense. Islamism as a political and Globalist phenomenon is not dissimilar to Zionism.
Zionism is a Political movement and not Religous one when one considers it in a wider political context.
Neo-Liberal Globalism works through Think Tanks and pressure groups and is woven into the Fabric of the Washington Aligned Global Establishment there are other ideologically based secular groups which identify with a secular and homogenised end goal, such as Common Purpose or at a higher level of the hierarchy Rhodes Scholarships or the Erasmus exchange programmes.
The current move against Globalism to De Globalisation represented by the election of President Donald Trump and the Brexit vote and so-called Populist movements is a kick back against the dilution of culture.

@4.57 some Globalist Rules Based international Liberal order . Brexit is an inside Job.


I wrote this poem this morning thinking of Sweden and all things Swedish and how increased Federalisation and also a common defence policy in the EU was a flight away what I consider to be the Values of my adopted Swedish Family.
https://letthemconfectsweeterlies.blogspot.se/…/the-ghost-o…

My Freind David Malone has also written about this area of concern in his Golem XIV Blog .
http://www.golemxiv.co.uk/2016/11/culture-matters/
There has been an increased narrative in the liberal press in the Uk that Brexit voters were Racist or hankering after a fairytale mythological period of Empire which hid the shame of Mercantile imperialism for which current generations should still be doing penance for.
This term was coined to cover the sort of idea. Tätervolk German word meaning ‘Perpetrator people’ and applied by Orthodox Judaism to the alleged collective guilt of Germans as a race of people for the events of World War II – with particular emphasis on The Holocaust.
https://wikispooks.com/wiki/T%C3%A4tervolk
Political correctness is a problem here in Sweden, it is very noticeable to me as an immigrant here. Swedes have a lot to be proud of and their culture is one of them and their Language and manners.
President John F Kennedy famously sais. ´Ask not what your country can do for you, ask what you can do for your country.´
I the case of EU Enlargement and federalisation I think Swedes should be asking a similar question
Ask not how the Swedes should be more European but how the EU should be more
Swedish

The Ghost Of Palme. 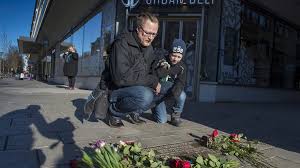 The Ghost Of Palme.
They laid the great Palme Low

So someday the people wouldn´t know

Of Their True Fatherland
Olof he had told of love
He had told of the language of Lagom
of the bosom of Motherland
The assassin’s bullet sent to censor
Yet still, Olof speaks as Sweden Cries
He is her conscience and culture
Sweden will not lie down
Her children will not be cowed
All Swedes new and born will hear
Olof whispers in every ear
Palme demands respect for Sweden
Olof´s blood was Sweden´s Pain.
Sweden Marches for Lagom
Olof Laid down his life for Lagom
Sweden demands Lagom for Swedes
And still, The great Palme speaks
His words are in the breeze
Sweden’s voice through the forest’s trees
Yes they Laid the great Palme Low
So someday the people wouldn´t Know
Of their founders’ history
Sweden is our Home and culture
Europe is political Geography/Economy
Olof showed us our Swedish soul
Yes They laid the great Palme Low
With his last breath and blood
Olof whispered into the air
We are all Palme now
and Albin Branting & Erlander
´´solidarity and consideration among People´´
https://www.youtube.com/watch?v=6xhvUlYCH24

“A pivotal, renowned, and polarizing figure domestically as well as in international politics since the 1960s, Palme was steadfast in his non-alignment policy towards the superpowers, accompanied by support for numerous third world liberation movements following decolonization including, most controversially, economic and vocal support for a number of Third World governments which were guilty of gross violations of human rights. Most famously, he was the first Western Head of Government to visit Cuba after its revolution, giving a speech in Santiago praising contemporary Cuban and Cambodian revolutionaries.

Frequently a critic of US and Soviet foreign policy, he resorted to fierce and often polarizing criticism in pinpointing his resistance towards imperialist ambitions and authoritarian regimes, including those of Francisco Franco of Spain, António de Oliveira Salazar of Portugal, Gustáv Husák of Czechoslovakia, B J Vorster and P W Botha of South Africa. His 1972 condemnation of the Hanoi bombings, notably comparing the tactic to the Treblinka extermination camp, resulted in a temporary freeze in Sweden–United States relations. Palme’s steadfast opposition to apartheid, which he labeled “a particularly gruesome system”, gave rise to theories of South African involvement in his death, which were further fueled when Eugene de Kock claimed South African security forces had orchestrated his death. His murder by an unapprehended assailant on a street in Stockholm on 28 February 1986 was the first of its kind in modern Swedish history, and the first assassination of a national leader since Gustav III. It had a great impact across Scandinavia. Local convict and addict Christer Pettersson was convicted of the murder but was acquitted on appeal by the Svea Court of Appeal.”

Lagom (pronounced [ˈlɑ̀ːɡɔm]) is a Swedish word meaning “just the right amount”.
The Lexin Swedish-English dictionary defines lagom as “enough, sufficient, adequate, just right”. Lagom is also widely translated as “in moderation“, “in balance”, “perfect-simple”, and “suitable” (in matter of amounts). Whereas words like sufficient and average suggest some degree of abstinence, scarcity, or failure, lagom carries the connotation of appropriateness, although not necessarily perfection. The archetypical Swedish proverb “Lagom är bäst“, literally “The right amount is best”, is also translated as “Enough is as good as a feast”.[1] That same proverb is translated as “There is virtue in moderation”.[2]
Posted by Roger Lewis at 08:44
—
0046702273052
skype: rogerglewis
Skype telephone number +46406931188
Portfolio of on line Profiles( Go on be Nosy ) CLICK HERE PLEASE
#ConquestofDough

4 thoughts on “LAST NIGHT IN SWEDEN To A Louse On Seeing One On A Lady’s Bonnet, At Church ROBBIE BURNS”