INTRODUCTION
Edmund Burke was born at Dublin on the first of January, 1730.  His father was an attorney, who had fifteen children, of whom all but four died in their youth.  Edmund, the second son, being of delicate health in his childhood, was taught at home and at his grandfather’s house in the country before he was sent with his two brothers Garrett and Richard to a school at Ballitore, under Abraham Shackleton, a member of the Society of Friends.  For nearly forty years afterwards Burke paid an annual visit to Ballitore.
In 1744, after leaving school, Burke entered Trinity College, Dublin.  He graduated B.A. in 1748; M.A., 1751.  In 1750 he came to London, to the Middle Temple.  In 1756 Burke became known as a writer, by two pieces.  One was a pamphlet called “A Vindication of Natural Society.”  This was an ironical piece, reducing to absurdity those theories of the excellence of uncivilised humanity which were gathering strength in France, and had been favoured in the philosophical works of Bolingbroke, then lately published.  Burke’s other work published in 1756, was his “Essay on the Sublime and Beautiful.”
At this time Burke’s health broke down.  He was cared for in the house of a kindly physician, Dr. Nugent, and the result was that in the spring of 1757 he married Dr. Nugent’s daughter.  In the following year Burke made Samuel Johnson’s acquaintance, and acquaintance ripened fast into close friendship.  In 1758, also, a son was born; and, as a way of adding to his income, Burke suggested the plan of “The Annual Register.”
In 1761 Burke became private secretary to William Gerard Hamilton, who was then appointed Chief Secretary to Ireland.  In April, 1763, Burke’s services were recognised by a pension of £300 a year; but he threw this up in April, 1765, when he found that his services were considered to have been not only recognised, but also bought.  On the 10th of July in that year (1765) Lord Rockingham became Premier, and a week later Burke, through the good offices of an admiring friend who had come to know him in the newly-founded Turk’s Head Club, became Rockingham’s private secretary.  He was now the mainstay, if not the inspirer, of Rockingham’s policy of pacific compromise in the vexed questions between England and the American colonies.  Burke’s elder brother, who had lately succeeded to his father’s property, died also in 1765, and Burke sold the estate in Cork for £4,000.
Having become private secretary to Lord Rockingham, Burke entered Parliament as member for Wendover, and promptly took his place among the leading speakers in the House.
On the 30th of July, 1766, the Rockingham Ministry went out, and Burke wrote a defence of its policy in “A Short Account of a late Short Administration.”  In 1768 Burke bought for £23,000 an estate called Gregories or Butler’s Court, about a mile from Beaconsfield.  He called it by the more territorial name of Beaconsfield, and made it his home.  Burke’s endeavours to stay the policy that was driving the American colonies to revolution, caused the State of New York, in 1771, to nominate him as its agent.  About May, 1769, Edmund Burke began the pamphlet here given, Thoughts on the Present Discontents.  It was published in 1770, and four editions of it were issued before the end of the year.  It was directed chiefly against Court influence, that had first been used successfully against the Rockingham Ministry.  Allegiance to Rockingham caused Burke to write the pamphlet, but he based his argument upon essentials of his own faith as a statesman.  It was the beginning of the larger utterance of his political mind.
Court influence was strengthened in those days by the large number of newly-rich men, who bought their way into the House of Commons for personal reasons and could easily be attached to the King’s party.  In a population of 8,000,000 there were then but 160,000 electors, mostly nominal.  The great land-owners generally held the counties.  When two great houses disputed the county of York, the election lasted fourteen days, and the costs, chiefly in bribery, were said to have reached three hundred thousand pounds.  Many seats in Parliament were regarded as hereditary possessions, which could be let at rental, or to which the nominations could be sold.  Town corporations often let, to the highest bidders, seats in Parliament, for the benefit of the town funds.  The election of John Wilkes for Middlesex, in 1768, was taken as a triumph of the people.  The King and his ministers then brought the House of Commons into conflict with the freeholders of Westminster.  Discontent became active and general.  “Junius” began, in his letters, to attack boldly the King’s friends, and into the midst of the discontent was thrown a message from the Crown asking for half a million, to make good a shortcoming in the Civil List.  Men asked in vain what had been done with the lost money.  Confusion at home was increased by the great conflict with the American colonies; discontents, ever present, were colonial as well as home.  In such a time Burke endeavoured to show by what pilotage he would have men weather the storm.
H. M.

THOUGHTS ON THE PRESENT DISCONTENTS

“Thy favourites grow not up by fortune’s sport,
Or from the crimes or follies of a Court;
On the firm basis of desert they rise,
From long-tried faith, and friendship’s holy ties.”

Maximilien de Béthune, 1st Duke of Sully, Marquis of Rosny and Nogent, Count of Muret and Villebon, Viscount of Meaux (13 December 1560 – 22 December 1641) was a nobleman, soldier, statesman, and faithful right-hand man who assisted king Henry IV of France in the rule of France. Historians emphasize Sully’s role in building a strong centralized administrative system in France using coercion and highly effective new administrative techniques. His policies were not original, and most were reversed. Historians have also studied his neo-Stoicism and his ideas about virtue, prudence, and discipline.[1]

From 1596, when he was added to Henry’s finance commission, Rosny introduced some order into France’s economic affairs. Acting as sole Superintendent of Finances at the end of 1601, he authorized the free exportation of grain and wine, reduced legal interest, established a special court to try cases of peculation, forbade provincial governors to raise money on their own authority, and otherwise removed many abuses of tax-collecting. Rosny abolished several offices, and by his honest, rigorous conduct of the country’s finances, he was able to save between 1600 and 1610 an average of a million livres a year.[3]
His achievements were by no means solely financial. In 1599, he was appointed grand commissioner of highways and public works, superintendent of fortifications and grand master of artillery; in 1602, governor of Nantes and of Jargeau, captain-general of the Queen’s gens d’armes and governor of the Bastille; in 1604, he was governor of Poitou; and in 1606, made first duke of Sully and a pair de France, ranking next to princes of the blood. He declined the office of constable of France because he would not become a Roman Catholic.[3]

Statue of Sully at the Palais du Louvre, Paris.

Sully encouraged agriculture, urged the free circulation of produce, promoted stock-raising, forbade the destruction of the forests, drained swamps, built roads and bridges, planned a vast system of canals and actually began the Canal de Briare. He strengthened the French military establishment; under his direction, the construction of a great line of defences on the frontiers began. Abroad, Sully opposed the king’s colonial policy as inconsistent with French interests, in opposition to men like Champlain who urged greater colonial efforts in Canada and elsewhere. Neither did Sully show much favor toward industrial pursuits but, on the urgent solicitation of the king, he established a few silk factories. He fought together with Henry IV in Savoy (1600–1601) and negotiated the treaty of peace in 1602; in 1603, he represented Henry at the court of James I of England; and throughout the reign, he helped the king to put down insurrections of the nobles, whether Roman Catholic or Protestant. It was Sully, too, who arranged the marriage between Henry IV and Marie de’ Medici.[3] 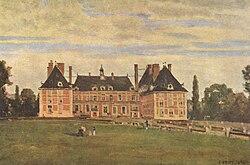 Sully was very unpopular because he was a favorite and was seen as selfish, obstinate, and rude. He was hated by most Catholics because he was a Protestant, and by most Protestants because he was faithful to the king. He amassed a large personal fortune, and his jealousy of all other ministers and favorites was extravagant. Nevertheless, he was an excellent man of business, inexorable in punishing malversation and dishonesty on the part of others, and opposed to ruinous court expenditures that was the bane of almost all European monarchies in his day. He was gifted with executive ability, with confidence and resolution, with fondness for work, and above all with deep devotion to his master. He was implicitly trusted by Henry IV and proved himself the most able assistant of the king in dispelling the chaos into which the religious and civil wars had plunged France. After Henry IV, Sully was a major driving force behind the happy transformation in France between 1598 and 1610, in which agriculture and commerce benefitted, and peace and internal order were reestablished.[3]

27 thoughts on “On the present discontents, Burke opined #Conquest of Dough”