Another long Day at the coal face of pre history.
The early development of Farming and the trade routes between those first Farming communities are integral to What we are as Human Beings, Communities, Societies and Nations today.

Anyway I really Liked this Graphic from the Wikipedia Article on the Mesolithic Period in pre historic Europe  https://en.wikipedia.org/wiki/Prehistoric_Europe 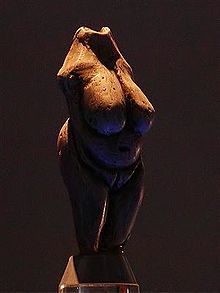 A Venus from Moravany nad Váhom, which dates back to 22,800 BC

It was ploughed up sometime before 1930 by the farmer Štefan Hulman-Petrech in Podkovica near the village of Moravany nad Váhom in Slovakia.
It is made of mammoth tusk ivory and is dated to 22,800 BCE, which places it in upper Paleolithic times.

The copy of this Venus currently resides in the Bratislava Castle exposition of the Slovak National Museum.[2]
If you are following the development of the web site for Conquest of dough and have delved into some of the Fertile Crescent stuff you might be as struck by the Venus of Morvany Statuette as I am. It bears a Striking resemblance to many of the fertility goddesses of early Uruk Cultures and also to Queen Ati of Punt.

Depiction of the emblems of Ishtar (Venus), Sin (Moon), and Shamash (Sun) on a boundary stone of Meli-Shipak II (12th century BC)

The Nebra sky disk is a bronze disk of around 30 centimeters (12 in) diameter and a weight of 2.2 kilograms (4.9 lb), with a blue-green patina and inlaid with gold symbols. These are interpreted generally as a sun or full moon, a lunar crescent, and stars (including a cluster interpreted as the Pleiades). Two golden arcs along the sides, marking the angle between the solstices, were added later. A final addition was another arc at the bottom surrounded with multiple strokes (of uncertain meaning, variously interpreted as a Solar Barge with numerous oars, as the Milky Way, or as a rainbow).
The disk is attributed to a site near Nebra, Saxony-Anhalt, in Germany, and associatively dated to c. 1600 BC. It has been associated with the Bronze Age Unetice culture.
The disk is unlike any known artistic style from the period, and was initially suspected of being a forgery, but now is widely accepted as authentic.
The Nebra sky disk features the oldest concrete depiction of the cosmos worldwide. In June 2013 it was included in the UNESCO Memory of the World Register and termed “one of the most important archaeological finds of the twentieth century.”[1]

The Decline and Fall of Practically Everybody

“Perhaps a note on how Cuppy worked would be of interest to his readers. First of all, be- fore writing a line on any topic – or even thinking about what he might write – he would read every volume and article on the subject that he could find – including, in many cases, obscure books no longer available in this country. This was standard operating procedure, whether the topic in question was the Giant Ground Sloth or Catherine the Great.
After having absorbed this exhaustive amount of material, he would make notes on little 3-by-5 index cards, which he would then file under the appropriate subheading in a card- file box. Usually he would amass hundreds and hundreds of these cards in several boxes, before beginning to block out his piece. In some cases, he would read more than twenty- five thick volumes before writing a one-thousand-word piece. Cuppy felt that he must know his subject as thoroughly as was humanly possible before going to work on it.”

I highly recommend this Book, it is hilarious and gives a context in the most concentrated formula one could possibly imagine it’s the Strongest un cut humour I have ever encountered, pure Colombian rocket fuel for the funny bone.

“In 1950 a group of V.I.P. wives was taken on a tour of NATO headquarters in Europe. En- tering Dwight D. Eisenhower’s office, they saw a single book lying on an otherwise empty desk, evidently a work of profound importance that consoled or inspired the Commander in Chief as he searched for a path to world peace. The book’s rather disconcerting title was The Decline and Fall of Practically Everybody.
It was not surprising that the book should be there: it was, after all, almost everywhere, being one of the major hits of the year. The Decline and Fall spent four months on the New York Times best-seller list, and Edward R. Murrow devoted more than two-thirds of one of his nightly CBS news programs to a reading from Will Cuppy’s historical sketches, with his colleague Don Hollenbeck appending the footnotes. “It’s the history book of the year,” Murrow concluded. Scholars praised its impeccable accuracy, while critics and laymen applauded its humor, scarcely realizing that every fact it contained was correct. The book eventually went through eighteen hardcover printings and ten foreign editions before it, and its author, lapsed into temporary obscurity.”

Tomorrow I hope to get back to the Book itself, The Conquest of Dough, will it seems, involve the writer conquering some of his own curiosity and the temptation to head off up the highways and bye ways and less well-worn paths of historical arcana.
http://theconquestofdough.weebly.com/

The web site is pretty much as it will be now until I compile the final bibliography for the novel, which will I hope not take as long as Will Cuppy´s masterpiece to finish and indeed be left for compilation by some unfortunate friend. ( Must re-read John Peels Margrave of the Marshes, on that note.)

I call this one Venus Akimbo.

Reminds me of  a Funny story about a Character from the early days of the London Docklands Entrepreneurial Crowd, Mike Barnet. I had let a Building for A client To a Snooker Hall, it was a Post Industrial Modern Masterpiece next door to Richard Desmonds First HQ he built for the early Northern And Shell before he became the proprietor of the Daily Express. Anyway 33 Mill Harbour was to be a Snooker Hall and Mike Barnett was doing the PR for which a Young Lady had been hired to drape her self suggestively around the Snooker Tables and on Stairways between the Mezzanine floors arrayed through the Cavernous interior of what was One of my Favourite buildings, up there with the Old FT printing Works, but I digress.

Anyway, Mike Felt that the Model could show a little more leg and upon a further invite for A little more Leg and a raising of the already impossibly short Skirt the Model turned and quite Matter of factly exclaimed.

“If I hitch it up any more than that I´ll have to charge you for a Flap shot”.

2 thoughts on “Back to the Beginning. WIll Cuppy and the rise and fall of other Distractions.”

[What is it all about?] https://rogerlewis.substack.com/p/notebook-post?sd=pf is Millenarianism a safe and effective vaccine against…