The Brandt Report was updated in 2001 by James B. Quilligan, who was the director of Brandt Commission Research, a public information agency on the Independent Commission on International Development Issues between 1980 and 1987. His report, ‘The Brandt Equation – 21st Century Blueprint for the New Global Economy’ can be downloaded here as a PDF file.

From Wikipedia, the free encyclopedia
Jump to navigationJump to search 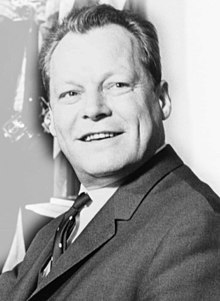 Willy Brandt, the creator of the Brandt Report

The Brandt Report is the report written by the Independent Commission, first chaired by Willy Brandt (the former German Chancellor) in 1980, to review international development issues. The result of this report provided an understanding of drastic differences in the economic development for both the North and South hemispheres of the world.
The Brandt Report suggests primarily that a great chasm in standard of living exists along the North-South divide and there should therefore be a large transfer of resources from developed to developing countries. The countries North of the divide are extremely wealthy due to their successful trade in manufactured goods, whereas the countries South of the divide suffer poverty due to their trade in intermediate goods, where the export incomes are low.
The Brandt Commission envisaged a new kind of global security. It built its arguments on a pluralist perspective that combines several social, economic and political perils together with classical military perils. 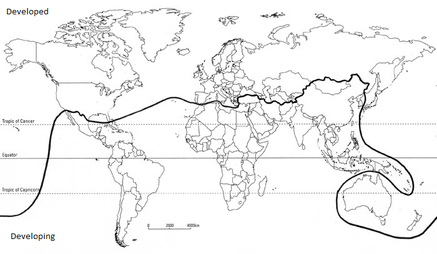 The Brandt line, division of world on rich north and poor south.

The Brandt Line is a visual depiction of the North-South divide between their economies, based on GDP per capita,[1] proposed by Willy Brandt in the 1980s. It encircles the world at a latitude of 30° N, passing between North and Central America, north of Africa and India, but lowered towards the south to include Australia and New Zealand above the line.

Twenty years later, in 2001, the Brandt Report was updated by James Quilligan, who was Information Director for the Brandt Commission between 1980 and 1987. His updated report was called “The Brandt Equation”.

The best selling book to date on International Development issues, the Brandt Report is a broad based analysis of the state of the world, with a necessary emphasis on the failure of the world economic system to provide social and economic equality for humanity. It highlights the economic trends that need to be reversed, and the solutions and strategies that urgently need to be implemented to resolve the income disparity between the Northern and Southern Hemispheres, financial and economic instability, and the growing problem of global poverty.

8 thoughts on “James B. Quilligan The Brandt Report, The Brandt Equation, The Financial Commons and Blockchain.”

A highly recommended read and watch. How about a Democracy where you get to join…

This article first appeared in International Socialism 79, June 1975. I HAVE come to Shelley…

Why should this fascinate an old Washington muckraker like you? Because it’s a black eye…

In the matter of Things as they seem to me versus, Things as I have been told they are. Notes for a future poem.

The Trial of Scorates Things as they seem to me. In the matter of Things…