Periodically, usually every 12-18 months I find that my reading and research loop back to a common point, All roads lead back to a central direction or a common vector.

Political developments in Britain appear more than a little confusing at the moment.

The parliament is in open revolt against a referendum decision with more voters for something than ever before, That is Brexit.  Most MPs  have worked tirelessly to undermine Brexit from the moment the suprise result was declared, never giving Brexit  a chance to prove whether it could work, the assumption is that There is no ALternative (TINA) to the Liberalisation and federalisation of a RUles Based European Order.

“Strangely, a way to understand these developments may have been provided by a scientific philosopher named Thomas Kuhn. Back in the 1960s he wrote an influential book called the Structure of Scientific Revolutions. His argument was that scientific thought did not evolve in a linear fashion, as scientific knowledge increased. Rather, modern human history had been marked by a series of forceful disruptions in scientific thought that he termed “paradigm shifts”. One minute a paradigm like Newtonian mechanics dominated, the next an entirely different model, like quantum mechanics, took its place – seemingly arriving as if out of nowhere.

Importantly, a shift, or revolution, was not related to the moment when the previous scientific theory was discredited by the mounting evidence against it. There was a lag, usually a long delay, between the evidence showing the new theory was a better “fit” and the old theory being discarded.

The reason, Kuhn concluded, was because of an emotional and intellectual inertia in the scientific community. Too many people – academics, research institutions, funding bodies, pundits – were invested in the established theory. As students, it was what they had grown up “knowing”. Leading professors in the field had made their reputations advancing and “proving” the theory. Vast sums had been expended in trying to confirm the theory. University departments were set up on the basis that the theory was correct. Too many people had too much to lose to admit they were wrong.

A paradigm shift typically ocurred, Kuhn argued, when a new generation of scholars and researchers exposed to the rival theory felt sufficiently frustrated by this inertia and had reached sufficiently senior posts that they could launch an assault on the old theory. At that point, the proponents of the traditional theory faced a crisis. The scientific establishment would resist, often aggressively, but at some point the fortifications protecting the old theory would crumble and collapse. Then suddenly almost everyone would switch to the new theory, treating the old theory as if it were some relic of the dark ages.

Science and politics are, of course, not precisely analogous. Nonetheless, I would suggest this is a useful way of understanding what we see happening to the British left at the moment. A younger generation no longer accepts the assumptions of neoliberalism that have guided and enriched an elite for nearly four decades.

Ideas of endless economic growth, inexhaustible oil, and an infinitely adaptable planet no longer make sense to a generation looking to its future rather than glorying in its past. They see an elite with two heads, creating an illusion of choice but enforcing strict conformity. On the fundamentals of economic and foreign policy, the Red Tories are little different from the Blue Tories.”

Are we going around in ever decreasing circles?

A barricade at the Notre-Dame-des-Landes ZAD. Banner reads: AGAINST THE AIRPORT AND ITS WORLD 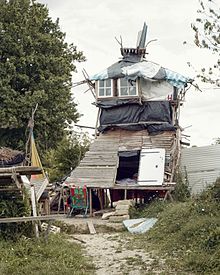 One of the many structures that have been built on roads crossing through Notre-Dame-des-Landes ZAD. This one serves as a lookout tower in preparation of evictions by police.

The expression Zone to Defend or ZAD (French: zone à défendre) is a French neologism used to refer to a militant occupation that is intended to physically blockade a development project. The ZADs are organized particularly in areas with an ecological or agricultural dimension,[1] notably in the permanent blockade village against an airport in Notre-Dame-des-Landes. However the name has also been used by occupations in urban areas, e.g.: in Rouen,[2] in Décines-Charpieu.[3] One of the movement’s first slogans was “ZADs everywhere” and though there are no official figures, in early 2016 there were estimated to have been between 10 and 15 ZADs across France.[4]

Who is paying the higher cost of energy ? Turning up the Differential Accumulation heat.

This Blog has aged incredibly well Anthony, prescient one might say! Regarding Gold and a…

Peak X, badly needs a new driver at the wheel. A review of Climate Crisis Economics ( 1st Edition)* By Stuart P. M. Mackintosh. (*not worth rushing stocks will last.)

Project Cabal ( sorry Syndicate ) The in house Magazine of the Global Elite, Turning up the Heat!

ROGER LEWIS Jan 26, 2022 It is quite apparent that these damaging energy policies are…

Talkin’ World War III Blues. It was easier to believe in Freedom of Speech and Democracy in 2011

At the end of one of our chats the other day, I said to Ranjan…