The Rapier slices mercilessly into the Masque of Oligarchy.No.3

something for the day after the weekend sir!

Monseigneur Macron. SEE UP THERE ON THAT CARRIAGE WHO IS THAT THE OWNER OF THE RIDING COAT UP ON THE CHAIR.#GiletsJaunes

a day in the life 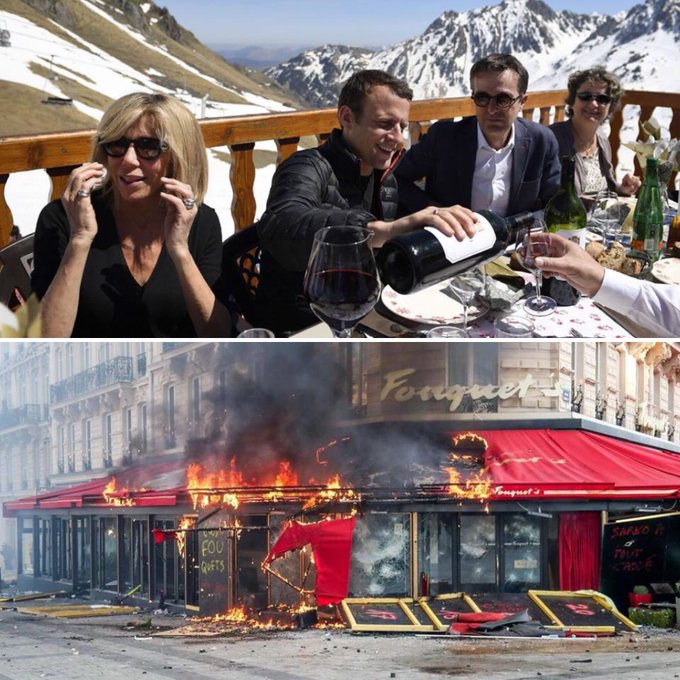 160 people are talking about this

GREENWASHING? THE GREEN MARCHES ARE MUTE ON THE “WAR FACTOR”

REVOLUTION FRANÇAISE: EMMANUEL MACRON AND THE QUEST TO REINVENT A NATION

The one person he listens to is his ever-smiling wife, on whose behalf he self-importantly militated so that she might be officially pronounced première dame. Nothing doing. Pascal Bruckner, the no-longer nouveau philosophe, calls her, with unusual lack of originality, l’éminence grise. In this guise she was probably responsible for her husband’s cravenly bathetic performance at Johnny Hallyday’s funeral – several minutes of high-octane drivel that caused the insentient to weep and the sentient to wince. Pedder amiably describes it as ‘both romantic and deeply calculating’. The same might be said of any number of populist, lush, intellectually void spectacles that offer no more than temporary relief, temporary communion. They are mere diversions. They are his forte. Chiselhurst awaits.

Macron, Reflected Glory and issuing platitudes devoid of context or meaning a Rhetorical Flourish of Gaelic Flatulence in the mode of Blair, Trudeau, Ummana, Clinton and the many plastic ornaments of a false pantheon of Political Pygmies.