The future of Publishing on Web 3.

1. why do readers need to register?

The Multi-Media platform  envisages that

“ The proposed Grub Street Journal App the App is a Librarian and Curator for multimedia creators and a Curator/Librarian Sensai teacher devils advocate reading group and search engine for the Journal Subscribers. Every Subscriber is an Editor. critic and is the completer of the Grey space.”

“The App is a personal archive curator for the multi-media- makers a Librarian/consultant for the readers and viewers.”

“The App will be a personal archive curator for the Writers and Filmmakers and a Librarian / Book Shop consultant for the readers and viewers. That’s what I hope we have created following some wacky ideas thrown at the Web 3 blue sky.”

2. what do you have in mind for the paywall functionality? will it be applied to at least some of each kind of content (video, writings, images)?

Parts 1 and 2 of the question are related, Registration even for pre paywall content or free public domain content for receipt of the Newsletter, ongoing updates etc, Registration can be anonymised it is not for external communication but it is for the platforms street teaming process.

Where the Consumer of free content is not the Product but earns the free content by completing a simple act of registering by sharing on twitter or embedding on a web site.

exchanging money. Then if money

is the sum of social relations in a

society, but it’s also an expression of

the surplus energy in society. When it

(money) is expressed as prosperity.”

“we’re talking about the monetizing

or not the monetize ability or not of an

knowledge. Is there profit to be made

from liking knowledge? And, if there is no

profit to be made from giving people

encouragement. That’s before you even

Chat With Ranjan, Tyranny of the Nerds, #ObjectiveKhunts, Grub Street

Participation online via a human-controlled proxy, Proof of Brain ( Steemit)

AI, sock puppets should not allow fake participation human intelligence behind distributed networks is where and for whom the value of the social relations and physical items exchanged should be generated. The network participants are from who value generates and to where value returns. Registration even at the levels of complimentary access is a requirement and the Paywall defines the limits of Access granted by Complementary and Earned access. 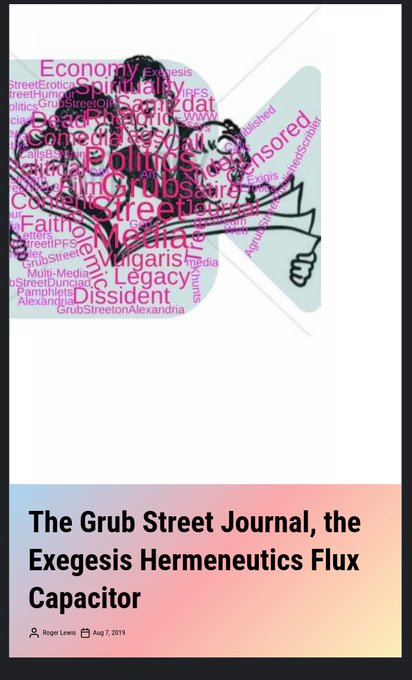 The Ethereum Daily Part of the Grub Street Journal

This Space is Fast-moving and Dynamic hence ongoing work on.

Rewarding to have my work about insight into Trump's success featured in MIT @techreview https://t.co/aGuGXt04zq pic.twitter.com/vjIi46Xf28

The Shape of Things Past informing the shape of things to come.

TIP: Download our app to your smart phone and listen in your car, at work, at home or school. Search for NOLIESRADIO in your app store.

This show was broadcast October 4, 2011.
It is now archived here — Use Player

Coming up Tuesday at 9am Pacific – 12 Noon Eastern – 16:00 GMT
Will be archived here after the broadcast by Tuesday evening. Email your questions or comments now.

Check out this Economist Magazine cover from 1998:

Notice the year on the digital coin. 2018. Notice that the symbol in the middle is made up of a zero and one, revealing it’s digital nature.
Notice that the Pheonix is a very important symbol in the occult.
What this picture is saying is that a force is going to crash and burn all the worlds paper currency (hyperinflation?) and then in the ashes of the old system will arise a one-world, unified digital currency system owned by the new world order of the Rising Phoenix. Published in 1998!
So who owns and controls the Economist?

If you can spoof the metadata of protected classes, you will be immune to Project Shield. The predator will not eat bad-tasting things.

I am very excited about it; I have been working very hard on What a new Publishing Platform on Web 3 looks like and it needs to be something quite New the psychology of surfing the web has been studied extensively this is another good site.

Then the Review of; Globalists: The End of Empire and the Birth of Neoliberalism by Quinn Slobodian, by Alexander Zevin
https://www.lrb.co.uk/v41/n16/alexander-zevin/every-penny-a-vote

Gives a Geo-Political view from the Fall of the Austro Hungarian Empire and Messrs Von Mises’, Von Hayeck’s and Schumpeter’s influences across the Jockeying for position in the Great Game of Monopoly Finance Capitalism.
“Neoliberalism is often conceived as a system of self-regulating markets, shrunken states and crudely rational individuals. Early neoliberals, however, didn’t believe in markets’ self-correcting properties. Instead, as Quinn Slobodian argues in Globalists: The End of Empire and the Birth of Neoliberalism, they were concerned above all with establishing governments, laws and institutions in which markets could be embedded in order to make them work as they should – not only at a national but at a global level.”

The Answer is to Network and Combine into Media Flotillas that can increase Media Portal focus points through which Internet users can be directed to Internet gardens and landscapes they may never discover with the Google Satellite Navigation. 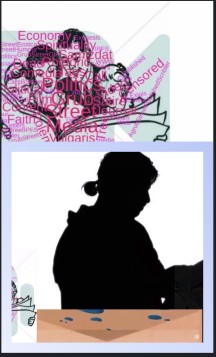 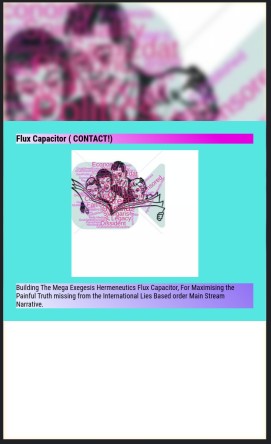 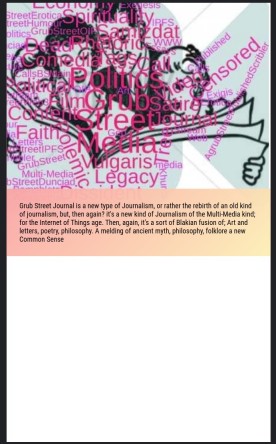 For Readers, Writers or researchers,

The Grub Street Journal is designed to fulfil the

Precis and Q and A promo video live streams etc. 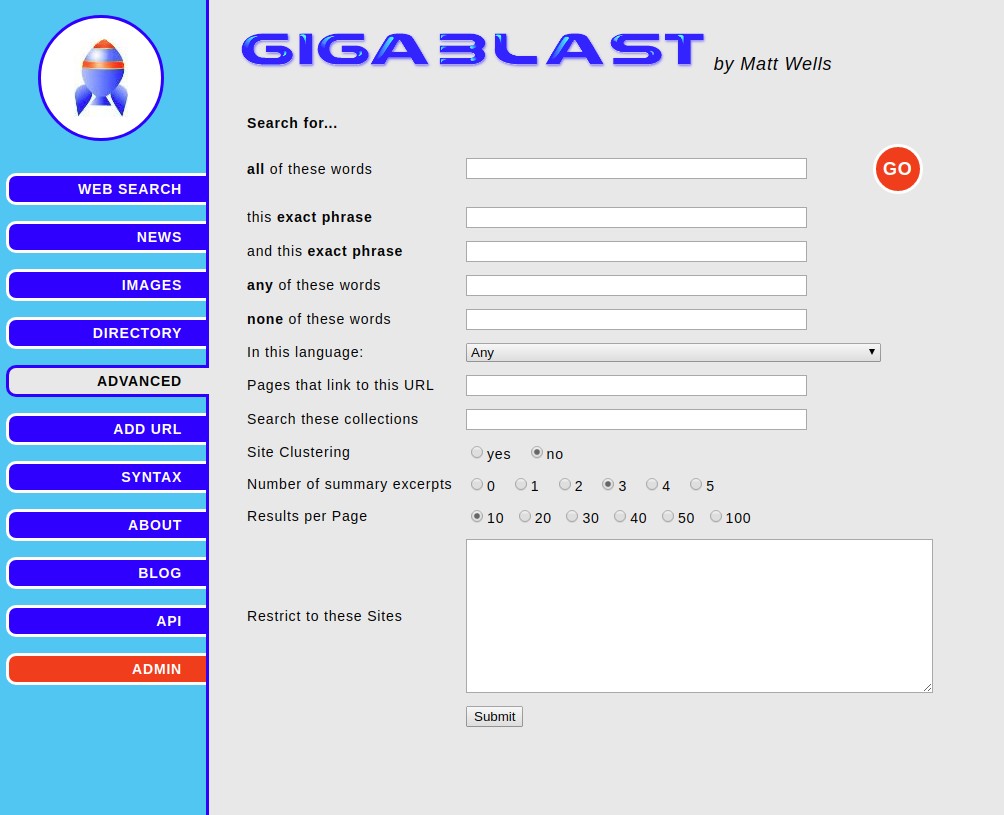 How to Add Custom Fields to the Leaky Paywall Registration Form

Customizing your subscription nag to work

How to set up renewal reminders

The World According to the Economist

In this landmark book, Alexander Zevin looks at the development of modern liberalism by examining the long history of the Economist newspaper, which, since 1843, has been the most tireless – and internationally influential – champion of the liberal cause anywhere in the world. But what exactly is liberalism, and how has its message evolved?

Liberalism at Large examines a political ideology on the move as it confronts the challenges that classical doctrine left unresolved: the rise of democracy, the expansion of empire, the ascendancy of high finance. Contact with such momentous forces was never going to leave the proponents of liberal values unchanged. Zevin holds a mirror to the politics—and personalities—of Economist editors past and present, from Victorian banker-essayists James Wilson and Walter Bagehot to latter-day eminences Bill Emmott and Zanny Minton Beddoes.

Today, neither economic crisis at home nor permanent warfare abroad has dimmed the Economist’s belief in unfettered markets, limited government, and a free hand for the West. Confidante to the powerful, emissary for the financial sector, portal onto international affairs, the bestselling newsweekly shapes the world its readers – as well as everyone else – inhabit. This is the first critical biography of one of the architects of a liberal world order now under increasing strain.

All other publications may be in decline, but the circulation and ad revenues of The Economist, especially in the US, are not just stable but growing. Why is everybody so awed?

Print journalism is in crisis, as newsstand sales, subscriptions and ad revenues all decline while the promised online profits are slow to arrive. None of which quite applies to The Economist. It has had newsstand setbacks, but its long-term success, particularly in the US, now its major market, remains a good news story. When editor Bill Emmott stepped down in 2006, US National Public Radio asked him how a magazine with a “sleep-inducing title” and “esoteric content” could have achieved a 13% rise in readership in 2005. Its circulation figures for 2010 — 1.42 million, 820,000 in the US — have filled the media with awe.

Every Penny a Vote

BUYGlobalists: The End of Empire and the Birth of Neoliberalism by Quinn Slobodian

Meantime, the Globe’s drag on the Times, quantified

It was only a little more than two years ago that the conventional wisdom said The New York Times shouldn’t—or couldn’t—charge online.

You don’t hear that anymore with the massive success of the Times’s paywall, which hit 727,000 subscribers in the quarter, up 28,000 in three months.

Even bigger, the Times’s paywall revenue has soared past its digital ad revenue. Digital subscriptions brought in $37.7 million in the third quarter, while digital ads brought just $32.9 million. When you consider the print-boosting effects of the paywall, which I’d estimate very (very) roughly at several million dollars a quarter, the paywall looks even better.

NYT revenue actually increased 2 percent in the 3rd quarter thanks to higher reader revenue and slower ad losses. The shocking digital-subscriber growth of the first two years has slowed, though, which means the paper’s upcoming expansion of its digital subscription model will be critical to continuing its stabilization.

All, of the above and more more more
https://www.blogbooker.com/index.php

12 thoughts on “The Grub Street Journal, curator for the multi-media- makers a Librarian/consultant for the readers and viewers, #”Exegesis Hermeneutics Flux Capacitor”! Back to the future of Radical Publishing.”

http://www.duesberg.com/papers/chemical-bases-various-aids-epidemics.pdf Bruce Charlton From Wikipedia, the free encyclopedia Jump to navigationJump to search Bruce Graham Charlton is a retired British medical doctor and was Visiting Professor of Theoretical Medicine at the University of Buckingham.[1] Until April 2019, he was Reader in Evolutionary Psychiatry at Newcastle University.[2] Charlton was editor of the controversial and non-peer reviewed journal Medical Hypotheses from 2003 to 2010. Contents 1Biography 2Publications 3See also 4References […]