via Fake News? Diamonds In The Cesspool

Fake fake news – is a page dedicated to some of Martin Summers and Tony Gosling’s picks of the world’s best internet news sites and aggregators which, because they are showing up mainstream media (MSM) lies, are, as of US president Barack Obama’s visit to Germany on Thursday 17th November 2016, being blacklisted and denounced to public and press by the mainstream London and Washington media. A common thread running between most of these ‘fake news’ sites is many don’t accept the official account of Al Qaeda/Bin Laden being behind the 2001, 9/11 attacks on New York and Washington. 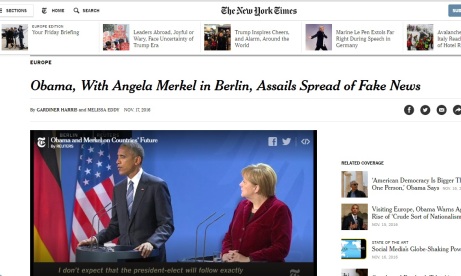 Two types of lists of ‘fake news’ are being published, some list only commercial disinformation and sensationalist websites but most deliberately mix up the world’s most reliable sources of internet news with the deliberate disinformation sites in an attempt to ‘contaminate’, or reduce traffic to the legitimate sites and awareness of the issues they raise. An attempt to discredit critiques of EU/US corporate propaganda. All disinfo. sites also include some genuine stories, usually reproduced from legitimate sources.

Diamonds in the cesspool:

Global Research – Michel Chossudovsky – professor of economics at the University of Ottawa and the president and director of the Centre for Research on Globalization – www.GlobalResearch.ca

Brazil based: The Intercept, to which Edward Snowden entrusted his initial ‘Prism’ NSA/GCHQ leaks and subsequently much more https://www.theintercept.com

Veterans of the Israeli attack on US Navy ship USS Liberty – www.USSlibertyVeterans.org

We Are Change – Luke Rudkowski – www.WeAreChange.org

Anonymous – An ‘independent team of concerned American citizens with a wide range of backgrounds and expertise’ – Prop Or Not – Is It Propaganda Or Not?

www.globalresearch.ca The Centre for Research on Globalization (CRG) is an independent research and media organization based in Montreal.  The CRG is a registered non-profit organization in the province of Quebec, Canada

www.thesaker.is Judge me not by what I say about myself, but by my blog or, better, my book.  All of the above is true, but these are my *external life circumstances* and they do not say much about who I really *am*.  My writings do.  Study them (if so inclined) and you will know who I am.

www.washingtonsblog.com Government leaders are doing all of the wrong things for the economy, and that the economy cannot fundamentally stabilize – and we cannot regain prosperity – unless:

Launched on March 26, 2002, SOTT.net is a research project of the non-profit Quantum Future Group (QFG). The project includes collecting, arranging, and analyzing news items that seem to best reflect the dominant ‘energies’ on the planet. This research further includes noting whether or not human beings, individually and/or collectively, can actually remember from one day to the next the state of the planet, and whether they are able to accurately read that information and make intelligent decisions about their future based on that knowledge. In short, SOTT.net is an experiment.  Today, SOTT is comprised of an international body of 159 volunteer editors, including many leading-edge professionals in the so-called hard sciences, medicine, history, sociology, psychology, engineering, and information technology. Whatever the topic, SOTT.net has an expert (or two!) who handles content in that particular field.

The Elevation of Propaganda to Fact. Peter Hitchens, sounding the retreat.

Enough with the black pilling Mr Hitchens. Most accept your reasons for taking it, you've made them perfectly clear. The more you go on about

END_OF_DOCUMENT_TOKEN_TO_BE_REPLACED

Homeatics whats the affordable Modular homes brand #home@ix all about?

Moduloft is committed to the Entry Level budget homeownership Market. Delivering affordable Homes and the means to Finance them literally without costing the earth. Moduloft

END_OF_DOCUMENT_TOKEN_TO_BE_REPLACED

One Flu over the Cuckoos Nest. Boris and Matts’ economy with the actualite. NHS Spin running on Lean #Covidstroika #WhathappenedtoFlu Where did all the beds go?

END_OF_DOCUMENT_TOKEN_TO_BE_REPLACED

Shubick for me gives the best answer to the question Posed by Per Kurowski http://perkurowski.blogspot.com/2016/04/here-are-17-reasons-for-why-i-believe.html Undefined purpose: The regulators never defined the purpose of our