“A fiction that elevates my soul is dearer to me than a host of base and despicable truths”. Pushkin.

This is the First Dialogue between John Hearn a “Monetarist Economist” and Roger Lewis (writer of this blog), Jack of all trades and master of none, general chef and Bottle Washer and occasional poet.

FREE MARKET CAPITALISM: IT`S THEIR FUTURE, ” I HAD A BRILLIANT IDEA FOR 21ST CENTURY ECONOMICS ” A LIVE STREAMED DIALOGUE ON MONEY, BANKING AND POLITICAL ECONOMY. “TINA” THE VILLAGE BIKE OR TEMPLE WHORE.

The next stage of this process for me is to consider the dialogue, The unanswered questions which did not come up and the questions where we found our views in opposition.
I am a keen user of the integral theory of analytic philosophy and this paper by Bernard Leitaer on Integral money explains the ins and outs so keep an eye out for my AQUAL analysis of this dialogue.

Some notes and Links from the dialogue .

Valuation of Brands and Goodwill?
Public Good, and Merit Good,

Contrast with the Commons?

The explanation of the rise and fall of the world system’s leading powers in terms of uneven economic development tends to overlook the role of the creation and management of public credit and national debts. Prior to 1815, the Netherlands and Great Britain owed a significant proportion of their respective victories over the larger and wealthier states of Spain and France to the development of competitive financial capabilities. Winning, however, leads to higher absolute debt burdens which, prior to 1945, encouraged postwar reductions in governmental expenditures. In this fashion, world leaders have contributed to the erosion of their preponderant capability positions before the emergence of international rivals. These ideas are elaborated within the context of George Modelski’s long cycle of world leadership theory and through a brief review of war-related financial problems between 1500 and 1815 and the consequent development of national debts. The longitudinal analysis of British and American public debt data provides collaborating empirical support.

Just on the War thing, I am a peacenic but not a pacifist, I do think the Military Industrial Complex is a huge part of current world Economic policy constipation, particularly in the US. Jus about to up load the rendered full stream, it is listenable. We got though probably 75% of the 26points I wanted to cover and examined some points I had not expected. I will get the trascrit processed and match up the questions to the sections to see where we got up to and then see if you are up for a second part to mop up what we didn’t get through. Sorry for the Technical hicoughs. The two Von Mises things I also referred to,

On the Road to the Servile State

In recent months, there has been a good deal of discussion of change in the United States. Sadly, over the last two centuries, the direction in which this country has been changing seems to be away from liberty and towards more control. The present changes are hardly unprecedented and certainly not unforeseen. In this essay I will examine two authors, Hilaire Belloc and F.A. Hayek, who present a useful analysis of our present situation.

In 1912, Hilaire Belloc published The Servile State, in which the Englishman prophesied that the world was moving to a reestablishment of slavery. This book made quite an impression on a number of thinkers, including F.A. Hayek. Hayek makes favorable mention of Belloc’s work in The Road to Serfdom, which depicts the modern world as reversing its advance from slavery to liberty.[1]

The Theory of Money

The subject of this fifth lecture is the theory of money and its value.

The Function of Money

The role of money is to make trade easier.

The Secret to Funding a Green New Deal

As alarm bells sound over the advancing destruction of the environment, a variety of Green New Deal proposals have appeared in the U.S. and Europe, along with some interesting academic debates about how to fund them. Monetary policy, normally relegated to obscure academic tomes and bureaucratic meetings behind closed doors, has suddenly taken center stage.

Summarising and data mining Twitter for a summary of opinions expressed in a debate or for product preferences or an analysis of keywords can be useful. It also involves decisions as to how one filters the content out.

There is a tendency to want to Bumper sticker ideas and summary and concision is an enemy really of faceting complex systems, The Climate debate suffers from this tendency but so does the Field of Economics especially when it insists on pretending that Either money does not exist or that Politics does not exist or sometimes that both do not exist and every one acting in an Economic system are Totally Rational and operating with full knowledge of all possible system states.

Well I rose to the challenge when John Loundsbury tweeted this earlier today.

An article published by Roy Sebag (“RS”) this past March with the above captioned title was recently brought to my attention in the course of an interesting “conversation” on Twitter, which actually included a well-known anthropologist, some crypto people, and some “gold-bugs” inter alia. In this essay, my first on Medium, I shall argue RS fails to properly describe “the Natural Order of Money” with an undisguised attempt to perpetuate a long-ago discredited “intrinsic” value theory. 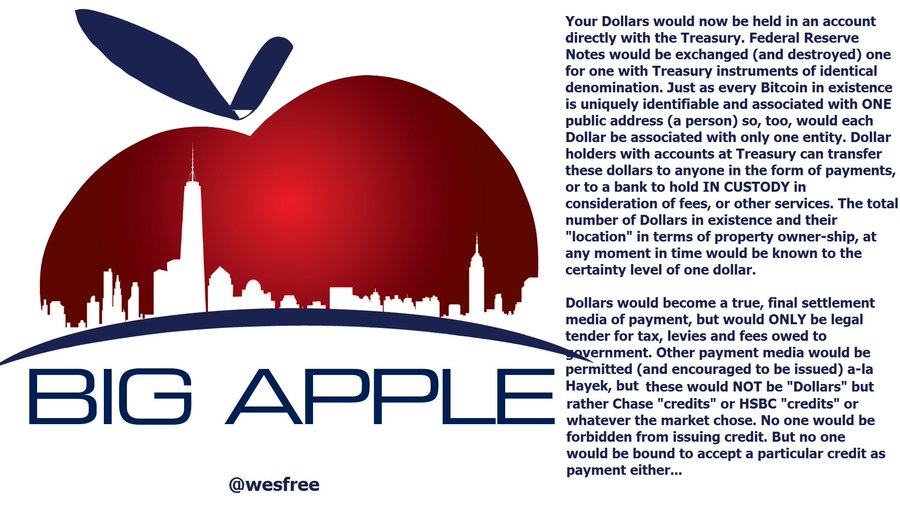 I’m @ThreadReaderApp a Twitter bot here to help you read threads more easily. To trigger me, you just have to reply to (or quote) any tweet of the thread you want to unroll and mention me with the “unroll” keyword and I’ll send you a link back on Twitter 😀

12 Log2-8 The Super Cooperator Constant. Remove the mote ( Log) from your own eye before accepting the exponential as punishment from the #WEF #GreatReset Borg.

The logarithm is the mathematical inverse of the exponential, so while exponential growth starts slowly…

Acting on Common Knowledge. #SITREP situation Report. “Of Course its true , This time out Loud”!