For the person most often called “Lord Haw-Haw”, see William Joyce.
1945: William Joyce lies in an ambulance under armed guard before being taken from British Second Army Headquarters to a hospital.

Lord Haw-Haw was a nickname applied to the US-born Briton William Joyce, who broadcast Nazi propaganda to the UK from Germany during the Second World War. The broadcasts opened with “Germany calling, Germany calling”, spoken in an affected upper-class English accent.

The same nickname was also applied to some other broadcasters of English-language propaganda from Germany, but it is Joyce with whom the name is now overwhelmingly identified. There are various theories about its origin. 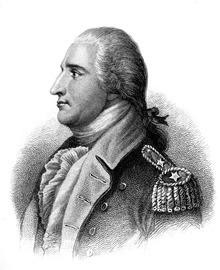 Arnold in American uniform, engraved by H. B. Hall, after John Trumbul

Dedication plaque on Groton Monument in Groton, CT to victims of Arnold’s slaughter following the Battle of Groton Heights:

Benedict Arnold (January 14, 1741 [O.S. January 3, 1740][1][2] – June 14, 1801) was an American military officer who served as a general during the American Revolutionary War, fighting for the American Continental Army before defecting to the British in 1780. George Washington had given him his fullest trust and placed him in command of the fortifications at West Point, New York. Arnold planned to surrender the fort to British forces, but the plot was discovered in September 1780 and he fled to the British. His name quickly became a byword in the United States for treason and betrayal because he led the British army in battle against the very men whom he had once commanded.[3]

Historians have identified many possible factors contributing to Arnold’s treason, while some debate their relative importance. According to W. D. Wetherell, he was:

among the hardest human beings to understand in American history. Did he become a traitor because of all the injustice he suffered, real and imagined, at the hands of the Continental Congress and his jealous fellow generals? Because of the constant agony of two battlefield wounds in an already gout-ridden leg? From psychological wounds received in his Connecticut childhood when his alcoholic father squandered the family’s fortunes? Or was it a kind of extreme midlife crisis, swerving from radical political beliefs to reactionary ones, a change accelerated by his marriage to the very young, very pretty, very Tory Peggy Shippen?[61]

The Cambridge Apostles is an intellectual society at the University of Cambridge founded in 1820 by George Tomlinson, a Cambridge student who went on to become the first Bishop of Gibraltar.[1]

The origin of the Apostles’ nickname dates from the number, twelve, of their founders. Membership consists largely of undergraduates, though there have been graduate student members, and members who already hold university and college posts. The society traditionally drew most of its members from Christ’s, St John’s, Jesus, Trinity and King’s Colleges.

The Apostles came to public attention again following the exposure of the Cambridge spy ring in 1951. Three Cambridge graduates with access to the top levels of government in Britain, one of them a former Apostle, were eventually found to have passed information to the KGB. The three known agents were Apostle Guy Burgess, an MI6 officer and secretary to the deputy foreign minister; Donald MacLean, foreign office secretary; and Kim Philby, MI6 officer and journalist.

In 1963, American writer Michael Straight, also an Apostle, and later publisher of The New Republic magazine, admitted to a covert relationship with the Soviets, and he named Anthony Blunt, MI5 officer, director of the Courtauld Institute, and art adviser to the Queen as his recruiter and a Soviet spy. Confronted with Straight’s confession, Blunt acknowledged his own treason and revealed that he had also drawn into espionage his fellow Apostle Leonard “Leo” Long. Straight also told investigators that the Apostle John Peter Astbury had been recruited for Soviet intelligence by either Blunt or Burgess. Leo Long confessed to delivering classified information to the Soviets from 1940 until 1952.

Writers have accused several other Apostles of being witting Soviet agents. Roland Perry in his book, The Fifth Man (London: Pan Books, 1994) makes a circumstantial case against Victor Rothschild, 3rd Baron Rothschild, who was a friend to both Burgess and Blunt. The espionage historian John Costello in The Mask of Treachery (London: William Collins & Sons, 1988) points a finger at the mathematician Alister Watson. Kimberley Cornish, in his controversial The Jew of Linz (London: Century, 1998), makes the rather extravagant claim that Ludwig Wittgenstein was the “éminence grise” of the Cambridge spies.

In the 1930s when Guy Burgess and Anthony Blunt were elected the membership was mainly Marxist. Documents from the Soviet archives included in the book The Crown Jewels (New Haven: Yale University Press, 1999), by Nigel West and Oleg Tsarev, indicate that it was Burgess who seduced and led Blunt into the Soviet underground. As the Queen’s art adviser, Blunt was knighted in 1956, but was stripped of his knighthood in 1979 after Prime Minister Margaret Thatcher publicly named him as a spy—his confession having been kept secret before then.

Kim Philby, as depicted on a Soviet Union stamp

The Cambridge Spy Ring was a ring of spies in the United Kingdom, which passed information to the Soviet Union during World War II and was active from the 1930s until at least into the early 1950s. None were ever prosecuted for spying. The number and membership of the ring emerged slowly from the 1950s onwards. As far as the general public was concerned, this started with the sudden flight of Donald Maclean (cryptonym: Homer) and Guy Burgess (cryptonym: Hicks) to the Soviet Union in 1951. Suspicion immediately fell on Kim Philby (cryptonym: Sonny, Stanley), but he did not defect until 1963. Anthony Blunt (cryptonyms: Tony, Johnson) and John Cairncross (cryptonym: Liszt), the last two of the group, confessed to British intelligence but this remained a secret for many years, until 1979 for Anthony Blunt and 1990 for John Cairncross. In time the Cambridge Four evolved to become the Cambridge Five. In the innermost circles of the KGB, they were supposedly dubbed as the Magnificent Five.

Not to be confused with Wittgenstein’s rod.

Wittgenstein’s Poker: The Story of a Ten-Minute Argument Between Two Great Philosophers is a 2001 book by BBC journalists David Edmonds and John Eidinow about events in the history of philosophy involving Sir Karl Popper and Ludwig Wittgenstein, leading to a confrontation at the Cambridge University Moral Sciences Club in 1946. The book was a bestseller and received positive reviews.[1][2]

On 25 October 1946, Popper (then at the London School of Economics), was invited to present a paper entitled “Are There Philosophical Problems?” at a meeting of the Cambridge University Moral Sciences Club, which was chaired by Wittgenstein. The two started arguing vehemently over whether there existed substantial problems in philosophy, or merely linguistic puzzles—the position taken by Wittgenstein. In Popper’s, and the popular account, Wittgenstein used a fireplace poker to emphasize his points, gesturing with it as the argument grew more heated. When challenged by Wittgenstein to state an example of a moral rule, Popper (later) claimed to have replied “Not to threaten visiting lecturers with pokers”, upon which (according to Popper) Wittgenstein threw down the poker and stormed out. Wittgenstein’s Poker collects and characterizes the accounts of the argument, as well as establishing the context of the careers of Popper, Wittgenstein and Bertrand Russell, also present at the meeting.

The book follows three narrative threads, each pivoting off the 1946 confrontation at Cambridge; the first is a documentary investigation into what precisely took place and the controversy over the differing accounts from observers; the second, a comparative personal history of the philosophers, contrasting their origins in Vienna and their differing ascents to philosophical prominence; and thirdly an exploration of the philosophical significance of the disagreement between the two and its relevance for the great debates in the early 20th century concerning the philosophy of language.[1]

rogerglewis  Uncategorized  March 17, 2018 4 Minutes
https://hat4uk.wordpress.com/2018/03/16/opinion-trump-to-fire-mcmaster-russia-to-nuke-america-putin-hated-by-everyone/#comment-738634
Showing the way out of the bottle, Wittgenstein or Epictetus?

In Such times as these John, I usually reach for the Enchiridion. Epictetus and his handy handbook reminds us all to Stick to our own knitting and do the right thing, eventually every one cottons on ( and it only takes 5% of us ( see Erica Chenoweth’s Work),
https://en.wikipedia.org/wiki/Erica_Chenoweth

Lance De Haven and Charles Pidgen, the next time some intellectual snob dis´s your suggestion that not all that people learn from History Books or NewsPapers is the truth, point them at these two gentlemen.https://philpapers.org/archive/PIGCOM.pdf

Let us start with History. In the electronic edition of the Collected Works and Correspondence of David Hume39, the word ‘conspiracy’ occurs 191 times (a), the word  ‘conspiracies’, 45 times, the word ‘conspirators’, 70 times, ‘conspirator’, 12 times, ‘conspired’, twice, ‘conspire’, 11 times, ‘conspired’, 23 times, ‘conspird’ (a misspelling of ‘conspired’), twice, ‘conspiring’, 8 times, ‘plot’ 94 times, ‘plots’, 9 times, ‘plotted’ twice, and ‘ploter’ (a rather amusing variant of ‘plotter’), three times. Concentrating on the word ‘conspiracy’, about three come from editors or correspondents such as Lady Hervey, and about ten concern the crazy theory, hatched in the paranoid brain of Jean-Jacques Rousseau, that ‘d’Alembert, Horace Walpole, and [Hume had] entered into a Conspiracy against him to lead him into England, and ruin him, by settling him in a most commodious and agreeable Manner, and by doubling his Income’40. There are four casual uses of ‘conspiracy’ in the Essays and The Natural History of Religion, in which Hume alludes to a historical conspiracy before going on to make some other historical, sociological or philosophical point. For example: ‘That bloody debauchee [the Emperor Commodus] being murdered by a conspiracy suddenly formed between his wench and her gallant, who happened at that time to be Praetorian Praefect; these immediately deliberated about choosing a master to human kind ….’ 41 There are several occurrences of ‘conspiracy’ in Hume’s letters to his fellow historian, William Robertson, in which he discusses (on the basis of state papers, intercepted correspondence and the like) the complicity of Mary, Queen of Scots in various conspiracies against her husband, Lord Darnley, her cousin, Elizabeth I and her son, James VI: ‘I am afraid, that you, as well as myself, have drawn Mary’s character with too great softenings. She was undoubtedly a violent woman at all times. You will see in Murden proofs of the utmost rancour against her innocent, good-natured, dutiful son. She certainly disinherited him. What think you of a conspiracy for kidnapping him, and delivering him a prisoner to the King of Spain, never to recover his liberty till he should turn Catholic?’ 42 However, the vast bulk of the uses of ‘conspiracy’ occur in Hume’s six volume History of England, long regarded as a standard work And in most of these uses Hume is simply recounting in a matter-of –fact way the conspiracies he finds in his sources: ‘A secret conspiracy was entered into to perpetrate in one day a general massacre of the Normans, like that which had formerly been executed upon the Danes..’ (History, vol. 1, p. 195); ‘A conspiracy of his [that is, William II’s] own barons, which was detected at this time, appeared a 40 Greig ed. (1932b) The Letters of David Hume, vol. 2, Letter 358 to Suard, p. 103. 41 Hume David (1985) Essays, Moral Political and Literary, ed. Eugene F. Miller, Indianapolis, Liberty Fund, p. 483, ‘Of the Original Contract’. 42 Greig ed. (1932a) The Letters of David Hume, vol. 1, Letter 162 to Robertson, p. 229

END_OF_DOCUMENT_TOKEN_TO_BE_REPLACED

THE WEEKEND ESSAY: why being small is the best defence against Mad Big WikiTacticalVoting https://t.co/CSzIi5XNQ5 — RealRLD (@rld_real_CPR) October 25, 2020 2/2 of the past 50 yearshttps://t.co/ArTiY5pP0T pic.twitter.com/WmqGAxNqFd — RealRLD (@rld_real_CPR) October 25, 2020 Hi John, Covid 19 does seem to be a controlled demolition in much the same tradition as Building 7 of the world …

END_OF_DOCUMENT_TOKEN_TO_BE_REPLACED

KLAUS SCHWAB AND HIS GREAT FASCIST RESET Posted on October 5, 2020 by winter oak