Salience, Relevance, Differentiation and The Polling Booth point of sale

The NHS, Fairness, Immigration & People, Brexit and an end to Austerity. Are the Relevant and Salient issues I get from the Data.

Applying An analysis with the lens of Lynton Crosby’s 4 Elements in Campaigning, Namely;

2. Relevance ( Do the people Give a Shit?)
Is it personally Relevant?

3. Differentiation ( They say That Too.)
Political Differences, Wheres the change, why change?

4. The point of Sale Execution (WTF?)
(Making the Lies Stick, Connect the policies to the Party.

Crosby says “if in Doubt Believe in something”, if your losing
then get someone else to do the Dirty work for you.

( The figures are Video Timings for direct Quotes)

Sane people at the next election will vote Tory where the Tory candidate can win. In old Labour seats where Brexit has a chance – vote Brexit. In seats where there is a choice between Labour and Lib Dems vote Lib Dem. Don’t let sentiment influence. Marxist Labour must be stopped.

The scripted narrative will surely deliver a Tory landslide or will it? We will see tomorrow how strong the Establishment spin machine remains in France. There seems to be rather a lot of Rovian type telekinesis being practised by the Neo-Liberal apologists who invariably do not acknowledge their ideological master.

´´The aide said that guys like me were “in what we call the reality-based community,” which he defined as people who “believe that solutions emerge from your judicious study of discernible reality.” I nodded and murmured something about enlightenment principles and empiricism. He cut me off. “That’s not the way the world really works anymore.” He continued “We’re an empire now, and when we act, we create our own reality. And while you’re studying that reality—judiciously, as you will—we’ll act again, creating other new realities, which you can study too, and that’s how things will sort out. We’re history’s actors … and you, all of you, will be left to just study what we do.”
Suskind, Ron (2004-10-17). Faith, Certainty and the Presidency of George W. Bush. The New York Times Magazine.

From Wikipedia, the free encyclopedia
The United Kingdom general election debates of 2010 consisted of a series of three leaders’ debates between the leaders of the three main parties contesting the 2010 United Kingdom general election: Gordon Brown, Prime Minister and leader of the Labour Party; David Cameron, Leader of the Opposition and Conservative Party; and Nick Clegg, leader of the third largest political party in the UK, the Liberal Democrats. They were the first such debates to be broadcast live in the run-up to a UK election.
The debates ran without a break for 90 minutes and were broadcast weekly by ITV, BSkyB and the BBC over three successive Thursday evenings starting on 15 April. They were moderated by Alastair Stewart, Adam Boulton and David Dimbleby respectively. The first half of each debate focused on a particular theme (domestic, international and economic affairs), before general issues were discussed. The questions were not disclosed to the leaders before the debate.
In addition to the leaders’ debates, on 29 March, the three main parties’ financial spokesmen participated in a debate focusing on the economy, with the Chancellor of the Exchequer Alistair Darling debating with the Shadow Chancellor George Osborne and Liberal Democrats’ Treasury spokesman Vince Cable on Channel 4. Debates also took place between 19 April and 5 May, a series of debates also took place on the BBC political TV series The Daily Politics, between members of the incumbent Labour Cabinet and their Conservative, Liberal Democrat counterparts and representatives from the Green Party, the Scottish National Party, Plaid Cymru and the UK Independence Party.
Debates were also held in Scotland and Wales and Northern Ireland, due to the devolved nature of various aspects of government in Scotland, Wales and Northern Ireland. In Scotland and Wales, representatives of three main parties were joined by respective nationalist party representatives who stand MPs only in Scotland and Wales, while in Northern Ireland, due to the main parties having no seats, debates were held between the four largest Northern Irish parties. The arrangements for the UK-wide leaders debates were criticised for being restricted to the main UK parties excluding other national minor parties and nationalist parties in Scotland and Wales, for covering many domestic matters which are devolved from Westminster, and also for being held in three locations solely in England.

From Wikipedia, the free encyclopedia
The term “United Kingdom general election debates” of 2015 refers to a series of four live television programmes featuring the main political party leaders that took place in March/April 2015 in the run-up to the general election. After various prior proposals and arguments over which parties should be represented,[1][2] there was a single debate between the leaders of seven British parties:[3]
There was a second debate involving the “challengers”, those in the above list who were not members of the outgoing coalition government. There were also two programmes – one with Cameron and Miliband; one with Cameron, Miliband and Clegg – in which the leaders answered questions but did not debate head-to-head.
Following the result of the election, a survey of 3,019 people, carried out by Panelbase, found that 38% of voters considered the debates to have influenced their voting intention.[4][5]

From Wikipedia, the free encyclopedia
The United Kingdom general election of 2017 is scheduled to take place on 8 June 2017. Each of the 650 parliamentary constituencies will elect one Member of Parliament (MP) to the House of Commons, the lower house of Parliament.
In line with the Fixed-term Parliaments Act 2011, an election had not been due until 7 May 2020, but a call for a snap election by Prime Minister Theresa May received the necessary two-thirds majority in a 522 to 13 vote in the House of Commons on 19 April 2017.
The Conservative Party, which has governed since 2015 (and as a senior coalition partner from 2010), is defending a majority of 12 against the Labour Party, the official opposition. The third largest party, the Scottish National Party, won 56 of the 59 Scottish constituencies in 2015. The Liberal Democrats, and the Northern Irish Democratic Unionist Party, are the fourth and fifth largest parties, with 9 and 8 seats respectively.

Negotiation positions following Britain’s invocation of Article 50 of the Treaty on European Union in March 2017 to leave the EU are expected to dominate the election campaign. Opinion polling for the popular vote since the election was called has given May’s Conservatives a significant lead over Labour led by Jeremy Corbyn.

Get involved in our attempt to track #GE2019 campaigns targeting you.

Here @faisalislam & I explain how to help: 2 simple screenshots from your Facebook feed👇🏾

1. The ad
2. “why am i seeing this?”
& if you can hometown/ constituency send to Election.ads@bbc.co.uk
Thanks! pic.twitter.com/mv66tFWJ8h

So very little has changed since 2016, I think the prelim or predicate in the article by Yannis nails the reasons why.” The process any member state must follow to exit the EU is governed by Article 50 of the bloc’s Lisbon Treaty, which, ironically, was authored by a British diplomat keen to deter exits from the EU. ”

The EU has hardened its stance on Federalism of a very curious sort More Brussels and less Europe federalism with an ECB and Commission that simply does not allow subsidiarity in questions of monetary policy which is causing the French and Italian problems going on at the moment for which Mr Macron and Mssrs Tusk and Junker seem so blissfully in denial of. Karl Bildt was prescient in these pages here https://www.project-syndicate.org/commentary/remaking-post-brexit-european-union-by-carl-bildt-2016-07# on these questions more generally.
The importance of Subsidiarity and the competencies of the commission are highlighted in this blog.
https://notthegrubstreetjournal.com/2017/02/19/meet-the-fuggers-brexit-the-euro-and-clueless-elites/

Another problem is the question of EU military unification a process which has continued under the radar of the Brexit Fuss. https://twitter.com/PMotels/status/1085107914216480768

So its as we were. Democracy Unfolded Emergent Reality of Brexit. (a poem)
https://d.tube/#!/v/tonefreqhz/s1spzamx

SO LITTLE HAS CHANGED. HAS EVERYTHING CHANGED?

What is the direction of travel and the main narrative embedded in the Narrative of the past 40 years? The Rules-Based International Order or ( New World Order ) Narratives.

5. Elitism, Starfucking worship of ”The Elites** Submission to Judgement by Experts? 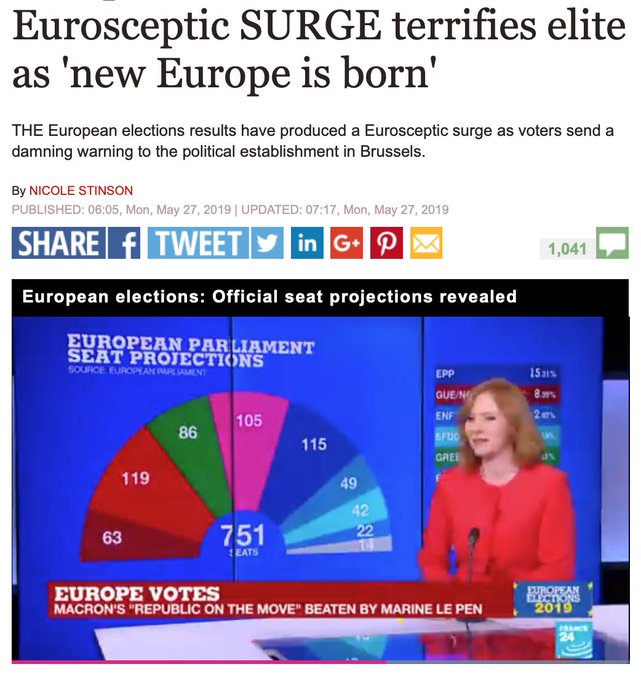 203 people are talking about this

Most people of course will recite the “life liberty and the pursuit of happiness” when asked what they recall of the document but mine would be the lines that follow:

“That to secure these rights governments are instituted among men, deriving their just powers from the consent of the governed…”

This says everything. Our rights are unalienable. And the only purpose of government is to secure these rights.

So why is it, how is it, that government is the very thing which we find ourselves defending against its tyranny?

Thread by @peter25674: “I really do get annoyed when any remain voter talks about funding. People’s…

Thread by @peter25674: “I really do get annoyed when any remain voter talks about funding. People’s Vote declared one donation during the 20tion. It was for £82,822.45 a figure which coincidentally…

There is now evidence that the EU (via companies it funds) have donated to Remain campaigns in the following;

How long until the evidence shows the interference in these EU elections?

#Home@ix #Moduloft, The Affordable Housing Manufacturers. Defining the Terms of and Boundary Conditions of our Domain.

The outstanding value of all residential mortgage loans was £1,527.3 billion at the end of…

Back to Work. Enough is Enough Paradox. 99%