Jeremy Corbyn even Stepford Corbyn is something of a George Best of Political Campaigning, and of course Best Nemesis Chopper Harris, in our metaphor for playing the man and not the ball, Stands in for the Presstitute hoards of stay in your lane stenography “Journalism”,
The Narrative is what one needs to discern reading this game is all about watching who is running off the ball, where are the spaces into which the attacks might flow and where are the man on man markers going and who has Jezzer by the Balls in a Vinnie jones like grip.

The Kick Off, and First Half.

This man is hoping to win the keys to Downing Street in three weeks’ time – and put Labour in power for the first time in nine years.

This morning, Labour leader Jeremy Corbyn will reveal exactly how he and his candidates aim to win over the voters on 12 December.

Labour unveiled its manifesto today and its proposals, along with those of the Conservatives, Lib Dems and SNP, will be tested at the BBC Question Time leaders’ special tomorrow.

The BBC is hosting a series of special programmes during this election.

Anti-Brexit campaign group Led By Donkeys has bought the website thebrexitparty.com and is offering to sell it to Nigel Farage for over £1m.

The group – known for its posters repeating quotes from politicians who may have changed their tune over Brexit – says it will increase the price by £50,000 a day.

If the Brexit Party leader buys it, Led By Donkeys says it will donate the money to the Joint Council for the Welfare of Immigrants.

The offer follows Brexit Party lawyers contacting Led By Donkeys and asking them to remove their logo from the site.

But the party said the campaign group refused to transfer the domain name – similar to their official site “thebrexitparty.org”.

Led By Donkeys bought the domain name earlier this year to challenge Mr Farage’s party during the European Parliament elections in May.

“When Farage and his millionaire backers set up the Brexit Party, they didn’t have the foresight to buy up all of the websites with their own name – and we did,” Led By Donkeys’ co-founder Oliver Knowles told the Press Association.

“They have offered to comply with these requests, but so far they are refusing to transfer the domain name.”

Tomorrow’s front page: Labour’s manifesto: on your side https://www.mirror.co.uk/news/politics/10-things-you-need-know-20931720 … #TomorrowsPaperToday 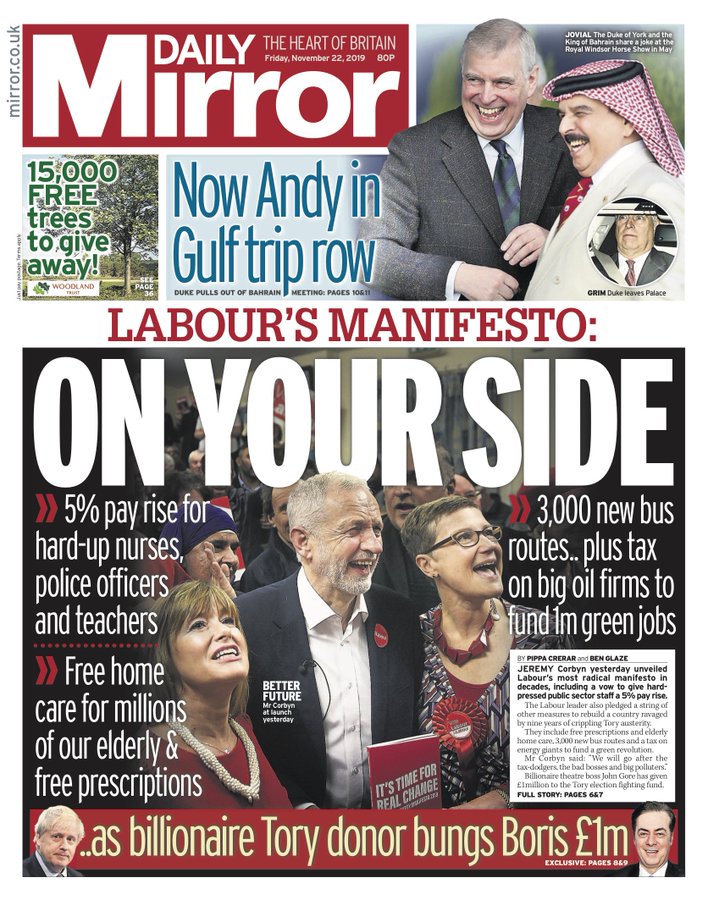 A Freind Made this Analogy I think it is a good won of Why Corbyn Will be rightfully pleased.
Politics, it’s funny old game.
Here’s a different take on what’s going on at the moment.
Football is our national game and lots of people are passionate about it.So I’ll use those terms I’ve seen a lot of people who are confused about people being up on a Labour loss.
Labour have not had a good showing in elections for years, so this election where it was very close,(3%, closer than Brexit) is akin to a 3rd division side getting promotion and getting to the cup final and putting a scare into say Chelsea or Man Utd. Not a win but a fantastic result.Everyone cheering on the team and the manager. what a great job.
On the other hand the Conservatives did very badly. Imagine being top of the league, in the cup, looking to have strong showing in Europe and then mid-season, the manager changes tactics, the team has a string of defeats, out of the cup, out of Europe and in danger of relegation, now reliant on other teams to stay up. If that was your team, as supporters, you would be furious, rightfully so and calling for the manager’s sacking and immediate replacement.
So, that being said, where are all the furious Tory voters baying for the sacking of the PM?
And this in the Awful Neo-Liberal Guardian. https://www.theguardian.com/commentisfree/2017/jun/13/true-progressive-alliance-made-jeremy-corbyn-prime-minister?CMP=share_btn_fb#comment-100385154
This reminds me of Two under-performing former Goal Scorers Disputing and claiming the Goal that drew the match when Clearly the Arsenal Centre Forward clearly stuck the ball in the back of the net.

The adjudication process comprises the viewing of video evidence followed by discussion by the Committee members. The guiding principle when adjudicating is as follows:

“As a rule, if the initial attempt is goalbound it is credited to the player making the goal attempt. However if the deflection means that a wayward effort results in a goal then it is attributed to the player who had the last definitive touch of the ball.” [1]

A true progressive alliance would have made Jeremy Corbyn prime minister | Clive Lewis and Caroline Lucas
We felt a profound sense of dismay when Tories won by narrow margins. In seat after seat, progressive votes were wasted, because of our broken electoral system
THEGUARDIAN.COM

Sorry for the typos in my previous post.
Just to wrap up here as I do not wish to just argue with myself.
I had a discussion back in April With the Author and another of his Followers of a 3 part blog post on Watts Up with That. The title of the Posts was as Follows.

EROEI
“EROEI is the preferred energy metric for Malthusians, environmental activists, Warmunists and proponents of uneconomic energy sources. The invention of this concept is generally credited to an ecology professor…”

Will give you a flavour, this wing of the Climate debate is I think as useful to the Political project of CO2 Carbon Trading as the Catastrophist Wing, both are fueled by, Polemic, Rhetoric and Emotional bed wetting and dummy spitting Its a Manichean thing and this Roger Pelke Junior Talk at the GWPF is worth watching on that point regarding the Polarised debate and Religous fervour pursued on both sides, parading their Hurt Feelings and needing to repair to their various Churches or Cult HQ,s A bracket into which I would place the Perspectiva, project of Rowson.

I took David Middleton to Task on his Appeals to the Rhetoric and Ad Hominem rather than tackling the substantive issues of Energy-based metrics for Energy investment and Consumption Decisions.

“The unit of account in a Fiat money system is an arbitrary unit basing a unit of account upon an SI Unit of energy makes a great deal of sense if you do not wish to be robbed of your skin in the game by the money laundering Banksters- Sadly the Author of this piece has gone off at half-cock failing to define terms and set boundary conditions. Watch Glassmans talk and slide show and try again-

“Clowns to the left of me Jokers to the Right. Useful idiots for usury everywhere. Watts up With That #LimitstoNouse https://notthegrubstreetjournal.com/2019/04/25/clowns-to-the-left-of-me-jokers-to-the-right-useful-idiots-for-usury-everywhere-watts-up-with-that-limitstonouse/ The Author lets us all down that insist that empirical evidence must be respected in The Debate about climate. Economics and Political Economy are imprecise pseudo-scientific priesthoods every bit as manufactured and absurd as Micheal Mann and his desperado band of cultist cool-aid hawkers. Steelers Wheel sums it up really. Quite one of the worse articles I have read here. ”

TO MAKE A DADAIST POEM
Take a newspaper.
Take some scissors.
Choose from this paper an article of the length you want to make your poem.
Cut out the article.
Next, carefully cut out each of the words that make up this article and put them all in a bag.
Shake gently.
Next, take out each cutting one after the other.
Copy conscientiously in the order in which they left the bag.
The poem will resemble you.
And there you are – an infinitely original author of charming sensibility, even though unappreciated by the vulgar herd.

The Match is about genuine internationalism or different brands of Globalisation sadly Stepford Labour is shilling for UN 2030 Global Government, Johnson is Shilling for the Rules-Based WTO NWO order which is the State department Hilary Clinton wing of the Opposing factions of Globalist Feudalism.

Although not necessarily, MPs can take back control if we elect those who are of and for the people. Voting Tactically can make the process bend to the needs and requirements of public opinion, the first vote on Bombing Syria proved that.
Of course, the Hilary Benn eulogy to bombing syria back to democracy in the House of Commons that followed the second time around gives a strong clue to where the basis of the Stepford Corbyn Labour manifesto is coming from.

Two Cheeks of the same arse. It’s gone to penalties and Stepford Corbyn, Chopper The Spaff Johnson, and Nige the spiv have all it seems belted their attempts, wide of the left, wide of the right and screwed it into the stands over the bar.

A plague on all their Elitist Houses, vote tactically lets vote the rascals out, all of em!!!!

On #ArtificialScarcity , Economical with the actualite.

Are we nearly there yet? Two weeks to flatten the curve. Are we there though?…

WE NEED TO TALK ABOUT MR. GLOBAL – PART ONE – CATHERINE AUSTIN FITTS &…