On London Bridge. It was noticeable that 3 of the Civilian Heroes are actually wearing Military issue Pea Jackets, there is an air of Death on the Rock in the demeanour of several of the Alarmingly calm gentlemen around the fringes. The Para-Military Police Guys Obviously had a Job to do. What though were either The SBS or SAS doing there?
It may well be that Intelligence put our best guys on the spot and thank goodness for that, the show biz aspects of it do however speak to a PR opportunity to COnvene the COBRA committee. More to See here I think To Wit.

The public took him down before police arrived.

Its obviously fake. This is not. pic.twitter.com/x1iVmMVBcZ

The Tweet that this followed was an obviously Fake Tweet form Jeremy Corbyn stating, Police Murder Man in Broad Daylight. It was so obviously photoshopped, I did not take a screen Cap, unfortunately.

Pea coats are cold-weather naval-issue garments. They were originally made using thick, coarse pilot cloth. This is the origin of the name of the coat. Pilot cloth became abbreviated to “P-cloth” and from there the coats themselves became known as “pea coats.” Pea coats have become an enduring fashion item and many fashion clothing manufacturers have created coats based on the regulation pea coat design. If you want an authentic US Navy pea coat, there are certain things you should look for to assure yourself of a coat’s authenticity.

Search for an authentic pea coat at a military surplus store 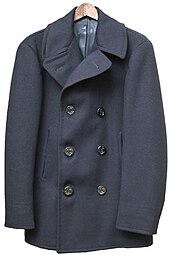 Military surplus coat, produced for the US Navy

A pea coat (or peacoat, pea jacket, pilot jacket, reefer jacket) is an outer coat, generally of a navy-coloured heavy wool,[1] originally worn by sailors of European and later American navies.[2] Pea coats are characterized by short length, broad lapels, double-breasted fronts, often large wooden, metal or plastic buttons, and vertical or slash pockets.[3] References to the pea jacket appear in American newspapers at least as early as the 1720s,[4] and modern renditions still maintain the original design and composition.[1]

The Telegraph reported that the suspect had a prior terrorism conviction he was on a “tag” for and had connections to “Islamist terror groups.”

Brexit is not a stand-alone or binary question I have commented before that Brexit is about an emperor and the battle for supremacy between two Eunuchs charged with looking after his harem. …

Brexit is not a stand-alone or binary question I have commented before that Brexit is about an emperor and the battle for supremacy between two Eunuchs charged with looking after his harem.

This Global Governance question seems missing again from the present discourse on Section 50, the context is much wider than the UK divorcing the EU, this is not a mere Marriage or even a menage a trios breaking up, this is more akin to a polygamous harem of the Ottoman Sultans involving some sort of internecine struggle between two of his, arguably high to middle-ranking eunuchs, for more recognition or status.

The Military-Industrial Complex and Brexit. A hypothesis.
#EUMilitaryUnification
The film suggests a plausible motive for a highly organised plot to remove Jo Cox from her position of MP. Her departure occurred just one week before the UK Brexit referendum and the film explains why this may have happened.
A similar Assassination took place in Sweden in another EU referendum campaign in 2003 of Anna Lindh, there are of course then question going back to the Assassination of Olof Palme and of Course JFK? Brexit is a Geo-Political Event and TINA will be obeyed.

Last Night in Lambeth there was another terrorist attack perpetrated by Islamicist Terrorists, whilst no claims were made immediately for responsibility it is clear that this Attack was claimed for the extremist Wahhabi Islamist Jihadist ideology, which is exported from Saudi Arabi via proxy´s in several North African and Middle Eastern wars.

Shortly after the first news reports started to emerge

the Telegraph newspaper and several celebrities whose accounts are monitored by the BBC´s Live News Feed team
called for a postponement of the General Election on the
8th of June.
Screen Capture from BBC

In considering such calls it is as well to remember the words from Kipling’s Poem Dane Geld.

Whilst all people will stand in solidarity against the barbarous and cowardly attack, we should Hold our political leaders and institutions to account and those of our deep state Intelligence services.

This Blog is by way of explication of the Video

Recent events in Manchester and a wider debate regarding Rape

in many UK communities have been conflated into a single issue.

Albeit that there are common themes and characteristics the
two distinct categories need to be considered separately
to seek solutions to each.
Many grooming gangs have been found to be of

Somali and Pakistani heritage and these cultural

identifiers have been conflated with the Moslem faith common to those Nationalidentities.

Money.Carbon Footprint Gold Standard. For or against?

This Blog is now back online as one whole. Hardly a startling announcement and I…

Event 201 with Hind sight, Was it a Monetary event.Have we gone direct #CBDC #Carbon CurrencyEndGame

“Fourth and fourth like languages actually do loop and have dual-stack architecture. ”Everything we are…