Pugilistic references have characterised the BBC election explainers this 2019 BRINO general election. Last Night in Saudi Arabia there was a Huge Boxing Event. Anthony Joshua regained his World Championship title Belts from Andy Ruis Junior. He had lost them in Madison Square Garden, New York, to Ruiz on June the first this year.

In the first World Championship fight, Ruiz the Challenger was substituted very late when the planned opponent Jarrell Baby Miller was suspended for multiple Performance enhancement drug infringements including Growth hormone offences. Ruiz had fought in recent weeks and happily took the fight and title shot, he had one loss only on his record and that was to a previous Joshua conquest, the New Zealand Fighter Joseph Parker, to whom Ruiz lost on a controversial points decision.

Ruis was widely mocked for his physique, he can only be described as fat, there is no sugar coating it, and based on appearances many failed to scratch below the surface to see his boxing pedigree which explained why he was much avoided by other contenders.

Ruis you see at 6’2 short for a modern heavyweight and at 19 stones, heavy even for the new breed of very tall Modern Heavyweights. Joshua is 6’6″ and an Adonis, of perfected physical Statuary. So with the Parker Victory, which was decisive and also with the aesthetic shortcomings of the Podgy Mexican, Joshua was criticised for taking an easy fight after the Jarrell Baby Miller suspension.

What everyone did not see coming was what happened next after getting up off the canvas from a stunning Joshua Right hand, Ruis immediately started counter punching as Joshua stepped in to finish the job. The opposite happened. Ruis with Lightning hand speed and mobility that defied his rotund appearance proceeded to beat Joshua into a Technical Knockout. Ruis had become world champion and The Inside fighting and close boxing skills and knock out punch pedigree of the most unlikely of world champions had prevailed.

And so tonight in Saudi Arabia in one of the great Boxing rematches Anthony Joshua and Ruis met to settle the score. And it is this settled score which bears some resemblance to the Two Pugilist Politicians Slugging it out in GE2019 the BRINO Election.

Many people had Ruis down to repeat his achievements from June the first. The argument being that His style was awkward for Joshua who has only 40 Amature Bouts and 24 Pro Fights to his name. In That, he has won a host of accolades and Trophies including Olympic Gold but, the Critics say Joshua is inexperienced compared to say Ruis who has boxed from the Age of 6 years old and Joshua came late to the Sport in his teens.

It Played out differently. Joshua a Much taller, Athletic and Slimmed-down version for this fight, at under 17 stones. Stood behind his long powerful Jab and cut Ruis in the first round with a powerful right, made possible due to the space offered by the dominance established by his “Laser-focused Jab”. Ruis with his lightning hand speed did get into the inside a few times and hurt Joshua , but unlike in Madison Square Garden where Joshua Rushed in to finish what appeared to be a down and out and substandard fatty, kept his boxing in gear and continued to execute a boxing game plan, Biding his time and racking up the points. The fight went the distance and Ruis Lost on points at most Ruis won 4 of the 12 rounds.

After watching the Debate between Johnson and Corbyn Friday Night and following analysis during yesterday, Saturday. I began thinking about Ruis Joshua 1 and was struck by the similarities both Physically, and also in debating styles of Ruis to our Tory pugnacious Fattened although not Oven Ready De Spaffel Turkey.

The rotund Boris Johnson, who fancies himself as a bit of a bruiser a legend in the ring as well as in his own trousers. Going for the Knockout line, the Sophist Ciceronian Rhetorician fighting on the inside always looking to land a combination of Phrases, well-rehearsed showy sound bites and not bothering to train for the long fight not paying detailed attention to prepare for a fight which could always go the distance. As the Civil service mandarins complained, “Boris doesn’t read his boxes.”

Ruis weighed in for “the Clash on the Dunes”, at over 20 stones much heavier than in the first fight and he admitted in the post-fight conference that he had not prepared as well as he should have. He showed a willingness to admit to his own mistakes that perhaps we would not expect of the self-entitled Spoiled Eton Rake Johnson. But the point is this.

Boris Johnson has been looking for a Knockout punch and is simply ill-prepared for a fight that goes the full distance. He is certainly Fattened but Not in the right way for Market Day between the ropes.

Joshua had changed his Game plan from the first fight and had lost weight and come for the full twelve rounds. He executed his game plan and did not go off course , In the 12th and final Round Ruis tried to Goad Joshua into a brawl, dropping his hands and waving Joshua in, Joshua kept throwing out his winning Jab and continued to Dance on his toes showing all the preparation both Physically and mentally had paid off.

Jeremy Corbyn in the Debate on Friday Night stayed behind his long and stinging NHS Jab, it won him many points. Corbyn also found that he could counter the Johnson overhead right on Corbyn’s remaining neutral on Brexit Corbyn he did this by good Head movement exploiting the Flimsiness of Johnson BRINO, which the Mediator Ruled a clash of heads in pointing out as Andrew Neil had in his unrequited challenge to the Tory Porker Pugilist. that The DUP agreed with Corbyn on the Irish border question

but you haven’t done a trade deal with the

EU you don’t know you could do a trade

deal with EU you don’t know there won’t

be no deal on trade with the EU do you

Northern Ireland is part of the customs

territory the dup the union is who were

your partners they agree with him and

These interventions by the Match referee Nick Robinson amount to

a point deduction and in a fight going the distance which will be decided on points such a deduction is devastating to the final outcome in a close contest.

As with the election and the effectiveness of Sophistry on the hard of thinking as pointed out by Lucian.

“Bring then above all ignorance, to which add confidence, audacity, and effrontery; as for diffidence, equity, moderation, and shame, you will please leave them at home; they are not merely needless, they are encumbrances.”

If the flute of Timotheus, or that of Ismenias, which its owner sold in Corinth for a couple of thousand pounds, were to fall into the hands of a person who did not know how to play the instrument, would that make him a flute-player? would his acquisition leave him any wiser than it found him?

So unlike Ruis, Boris is all show and no substance, Ruis can look forward to a Re-Match with Joshua and The Haters as this comment on the BBC shows will always hate.

How could any sane individual celebrate this utter tosh? Unable to hurt his opponent, nor take his opponent’s punches, AJ resorted to running scared for 12 rounds. Some redemption.
Wilder and Fury must be laughing at this third place play off in the heavyweight division.

This HYS shows who actually knows about boxing (as was demonstrated tonight) versus those who probably spent most of the fight shouting ‘knock him out’ at the screen.

Excellent example of boxing to get a job done.

A common criticism of debates is they don’t change minds and generally, people walk away believing the candidate won who they were supporting in the first place. Regardless, the first snap poll seems to suggest no clear winner, YouGov giving it 51-49, within the margin of error.

“Leaving aside your own party preference, who do you think performed best overall in tonight’s debate?” 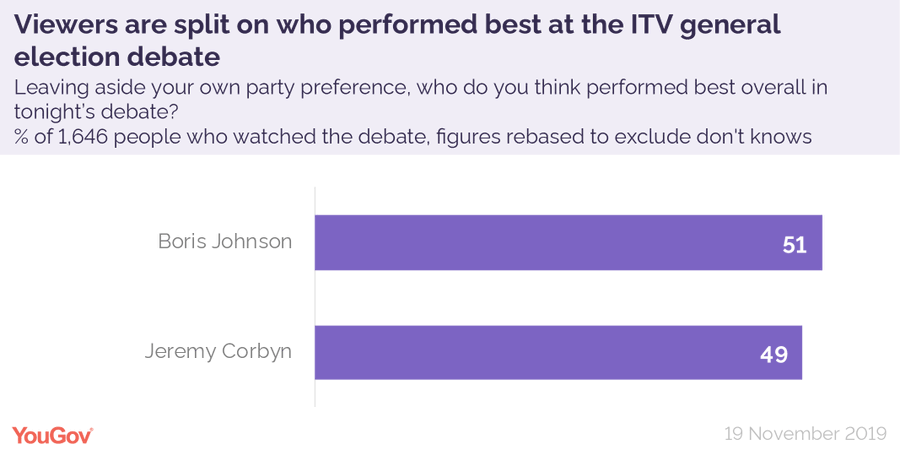 619 people are talking about this

A clearer picture will emerge in the coming days.

My Next Blog will look at these questions.

It is impossible for one to be internationalist without being a nationalist. Internationalism is possible only when nationalism becomes a fact, i.e., when peoples belonging to different countries have organized themselves and are able to act as one man. It is not nationalism that is evil, it is the narrowness, selfishness, exclusiveness which is the bane of modern nations which is evil. Each wants to profit at the expense of, and rise on the ruin of, the other. Indian nationalism has struck a different path. It wants to organize itself or to find full self-expression for the benefit and service of humanity at large… God having cast my lot in the midst of the people of India, I should be untrue to my Maker if I failed to serve them. If I do not know how to serve them I shall never know how to serve humanity. And I cannot possibly go wrong so long as I do not harm other nations in the act of serving my county. Gandhi   (YI, 18-6-1925, p. 211)

Commons and the Rights of Man.

In the matter of Things as they seem to me versus, Things as I have been told they are. Notes for a future poem.

The Trial of Scorates Things as they seem to me. In the matter of Things…