Thanks @HelenBranswell for watching my TED talk & for all you are doing to keep the information flow going to make us all more knowledgeable about this unprecedented outbreak. https://t.co/ECmf5Rd4RZ 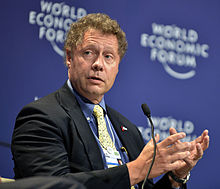 Seth Franklin Berkley, M.D. (born 1956 in New York City, New York) is a medical epidemiologist by training. He is the CEO of the GAVI Alliance and a global advocate on the power of vaccines. He is also the founder and former president and CEO of the International AIDS Vaccine Initiative (IAVI).[1] After graduation from McBurney School, New York, in 1974, he received a Bachelor of Science and medical degrees from Brown University, and trained in internal medicine at Harvard University.[2] Berkley has been featured on the cover of Newsweek[3] and recognized by Wired Magazine as among “The Wired 25”[4]—a salute to dreamers, inventors, mavericks and leaders—as well as by TIME magazine as one of the “100 Most Influential People in the World” in 2009.[5] In 2010, Fortune magazine named Berkley as one of its “Global Forum Visionaries.”[6] Speaking at the TED 2010 conference, Dr. Berkley explains how innovative vaccine design and production technologies are bringing us closer to controlling global health threats like flu and HIV.[7]

From 1984 to 1986, Berkley worked as a medical epidemiologist for the Center for Infectious Diseases of the U.S. Centers for Disease Control and Prevention (CDC) in Atlanta, GA. While working for the CDC, Berkley was involved in, among other things, managing the national Toxic Shock Syndrome surveillance system. He also conducted an investigation of an outbreak of Brazilian Purpuric Fever, a disease that was killing children in Brazil, and helped to discover the etiologic agent. In 1986, on assignment from the CDC, Berkley served as an epidemiologist for the Massachusetts Department of Public Health, working on routine surveillance and outbreak investigations.

A year later, while working for the Carter Presidential Center in Atlanta, Berkley was assigned as an epidemiologist at the Ministry of Health in Uganda. In this role, he worked to establish and manage the Ugandan surveillance system for AIDS, validate the AIDS clinical case definition for Africa and assist with the conduct and analysis of the national HIV sero-survey. Berkley played a role in helping to develop Uganda’s National AIDS Control programs, and served as an attending internal medicine physician at Mulago Hospital in Kampala.

Subsequently, Berkley worked for the Rockefeller Foundation, initially as program scientist and finally as associate director of the Health Sciences Division. During his eight years with the Rockefeller Foundation, Berkley managed programs in epidemiology, public health, medical and nursing education, vaccination, AIDS and sexually transmitted diseases and reproductive health in Africa, Asia, and Latin America. Some of his initiatives included developing a public health training program, Public Health School without Walls, which began in Zimbabwe, Ghana, Uganda, and then spread to Vietnam, as well as an international program to support non-governmental organizations working on AIDS, the International HIV/AIDS Alliance.

Berkley joined the GAVI Alliance as its chief executive officer (CEO) in August 2011.[8] The GAVI Alliance is a public-private partnership whose mission is to save children’s lives and protect people’s health by increasing access to immunisation in developing countries.

aSince its launch in 2000, GAVI has prevented more than five million future deaths and helped protect 288 million children with new and underused vaccines.[9] Under Berkley’s leadership, the alliance plans to deliver vaccines to another quarter of a billion children and prevent four million more deaths by 2015.[10]

The GAVI Alliance brings together developing country and donor governments, the World Health Organization, UNICEF, the World Bank, the vaccine industry in both industrialised and developing countries, research and technical agencies, civil society organizations, the Bill & Melinda Gates Foundation and other private philanthropists.>

In 1994, the Rockefeller Foundation, where Berkley was serving as associate director of health sciences, convened a series of international consensus meetings on the need for a new effort to address existing barriers to the development of an AIDS vaccine and jump-start AIDS vaccine research. These meetings, culminating in a conference in Bellagio, Italy, became the impetus for the establishment of IAVI in 1996 as an international NGO tasked with aggressively pursuing previously neglected approaches to AIDS vaccine development. Berkley was appointed interim president and later became CEO.[11]

Under Berkley’s leadership, the organization evolved into a worldwide public-private product development partnership with a staff of more than 200 employees that has worked with partners in 25 countries and, with partners, conducted 24 HIV vaccine trials.[12]

Berkley sits on a number of international steering committees and corporate and not-for-profit boards, including those of Gilead Sciences, the New York Academy of Sciences, and the Acumen Fund, and is a member of the Council of Foreign Relations.[13] Berkley is a member of the Scientific Advisory Panel assisting the UNAIDS High Level Commission on HIV Prevention.[2]

12 Log2-8 The Super Cooperator Constant. Remove the mote ( Log) from your own eye before accepting the exponential as punishment from the #WEF #GreatReset Borg.

The logarithm is the mathematical inverse of the exponential, so while exponential growth starts slowly…

Acting on Common Knowledge. #SITREP situation Report. “Of Course its true , This time out Loud”!