The ultimate energy source of the aurora is the solar wind flowing past the Earth. The magnetosphere and solar wind consist of plasma (ionized gas), which conducts electricity.
Free Energy and the Electro Magnetic Earth and Universe, why not save some money on warring over oil and send some of the Wonga the way of the Electrical Engineers and Plasma Physicists and the Cosmologists and the Maurice Cotterals of this world.
Another Post on some recent reading. ( Over at the free Speech Guitar Club.)
On Nobbers and so forth. I’m not big on Noburu and end days forecasting although the world will end some time as we know it today as it has in other times.
Fascinating things of that ilk I have found over the past year are to do with the Electronic universe an alternative to the string theory chaps and their Higgs Bosun ‘and Cern and so forth I’d suggest that the spin is more propaganda than quark gluon or nutrino’s engages in some sort of sub atomic multi dimensional ballet , could all end in tears similar to Economists and their pursuit of dogma masquerading as empirical science.
Anyway the two non main stream writers who have captured my imagination somewhat are  Maurice Cotteral he made some interesting discoveries regarding the Mayans as well incidentally but his work on Magnetism and the electronic universe and Gravity is really interesting.
http://www.mauricecotterell.com/gravity1.html

Follow a CME as it passes Venus then Earth, and explore how the Sun drives Earth’s winds and oceans.

Arcs rise above an active region on the surface of the Sun.

Coronal mass ejections release large quantities of matter and electromagnetic radiation into space above the Sun’s surface, either near the corona (sometimes called a solar prominence), or farther into the planetary system, or beyond (interplanetary CME). The ejected material is a magnetized plasma consisting primarily of electrons and protons. While the terrestrial effects of solar flares are very fast (limited by the speed of light), CMEs are relatively slow, developing at the Alfvén speed.[6]

Coronal mass ejections are associated with enormous changes and disturbances in the coronal magnetic field. They are usually observed with a white-light coronagraph.

On the Sun, magnetic reconnection may happen on solar arcades—a series of closely occurring loops of magnetic lines of force. These lines of force quickly reconnect into a low arcade of loops, leaving a helix of magnetic field unconnected to the rest of the arcade. The sudden release of energy during this process causes the solar flare and ejects the CME. The helical magnetic field and the material that it contains may violently expand outwards forming a CME.[10] This also explains why CMEs and solar flares typically erupt from what are known as the active regions on the Sun where magnetic fields are much stronger on average. 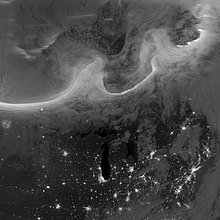 Satellite photo of aurora borealis stretching across Quebec and Ontario in the early morning of 8 October 2012.

When the ejection is directed towards Earth and reaches it as an interplanetary CME (ICME), the shock wave of traveling mass causes a geomagnetic storm that may disrupt Earth’s magnetosphere, compressing it on the day side and extending the night-side magnetic tail. When the magnetosphere reconnects on the nightside, it releases power on the order of terawatt scale, which is directed back toward Earth’s upper atmosphere.

Solar energetic particles can cause particularly strong aurorae in large regions around Earth’s magnetic poles. These are also known as the Northern Lights (aurora borealis) in the northern hemisphere, and the Southern Lights (aurora australis) in the southern hemisphere. Coronal mass ejections, along with solar flares of other origin, can disrupt radio transmissions and cause damage to satellites and electrical transmission line facilities, resulting in potentially massive and long-lasting power outages.[11][12]

Humans at high altitudes, as in airplanes or space stations, risk exposure to relatively intense solar particle events. The energy absorbed by astronauts is not reduced by a typical spacecraft shield design and, if any protection is provided, it would result from changes in the microscopic inhomogeneity of the energy absorption events.[citation needed]

WHO ATE ALL THE PIETIES.OR ´NOW IS NOT A TIME FOR SOUNDBITES´

This Blog is now back online as one whole. Hardly a startling announcement and I…

Event 201 with Hind sight, Was it a Monetary event.Have we gone direct #CBDC #Carbon CurrencyEndGame

“Fourth and fourth like languages actually do loop and have dual-stack architecture. ”Everything we are…

The Robin Smith Institute – Real Reform We are looking for primary cause. What are…